Precious, powerful, mysterious, magical. These are just a few of the qualities attributed to sapphires over the centuries. Many have used this beautiful gem to allure, to command authority, to heal the afflicted or even to influence destiny. But no one has used sapphires for splendor quite like the British monarchy and, particularly, Queen Elizabeth II. 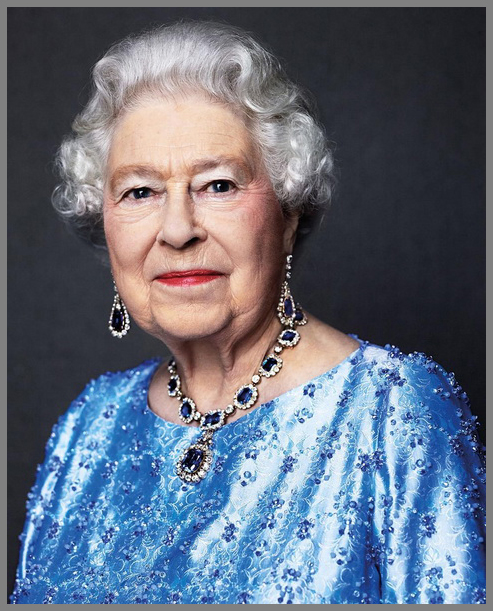 Queen Elizabeth II celebrates her Sapphire Jubilee in 2017, marking 65 years of her reign.

On February 6, the Queen celebrated her Sapphire Jubilee, becoming the first British monarch to reign for 65 years. During her unprecedented period of influence, Queen Elizabeth II became the most iconic and visually represented woman ever in the world. This set the stage for sapphires to be admired and desired across the pond and beyond.

We honor this historic occasion, as well as the Queen’s contribution to our love of sapphires, with a look at her magnificent showing of blue sapphire jewels over the last six and a half decades of her supremacy.

The Queen received the George VI Victorian Suite as a wedding gift from her father, King George VI, for her wedding to Prince Philip of Greece in 1947. This is an exquisite jewelry set reportedly created by Carrington & Co. in 1850. It consists of a necklace and earrings composed of colossal blue sapphires surrounded by diamonds. The necklace originally had 18 sapphire and diamond clusters, but the Queen had it shortened by four links in 1952. In 1959, she had the largest cluster turned into a pendant to dangle from the necklace. The pendant was also fitted with a pin for use as a brooch. 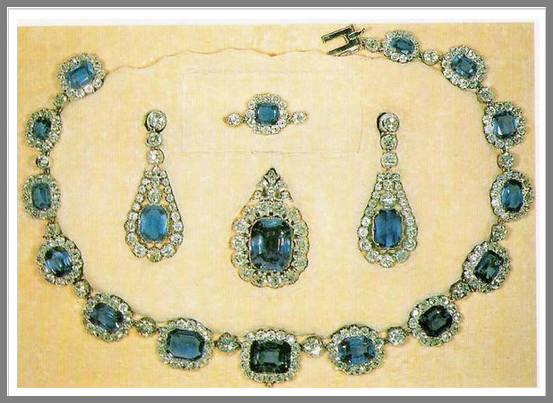 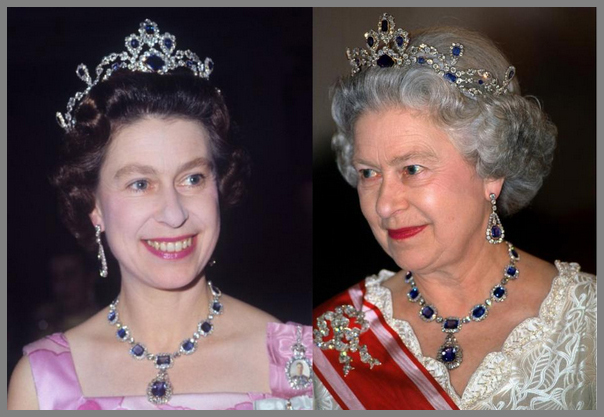 In 1963, the Queen commissioned a tiara and bracelet to match, which equaled in grandeur the decadent design of the set and the quality of the gemstones. Interestingly, the tiara is allegedly made from a necklace that originally belonged to Princess Louise of Belgium, who was forced to sell her belongings after her father disowned her for her scandalous behavior.

The George VI Victorian Suite includes some of the Queen’s most beloved sapphire jewels. She has worn them on many occasions throughout her reign, including on a State Visit to the United States in 1991 and to the annual Diplomatic Reception at Buckingham Palace in 2016. They are also pictured in a 2014 portrait of the Queen (top), originally taken for the GREAT Britain promotional campaign. The campaign launched soon after the Queen’s Diamond Jubilee celebrations, marking 60 years of her reign.

The brooch is undoubtedly the Queen’s signature piece of jewelry, and the Prince Albert Sapphire Brooch is perhaps her most cherished. It features a stunning deep-blue sapphire of significant size in an oval shape surrounded by 12 large round diamonds. 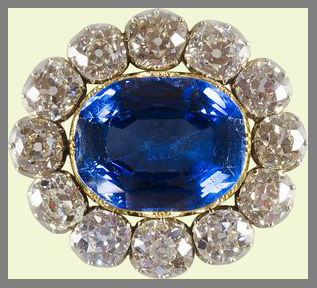 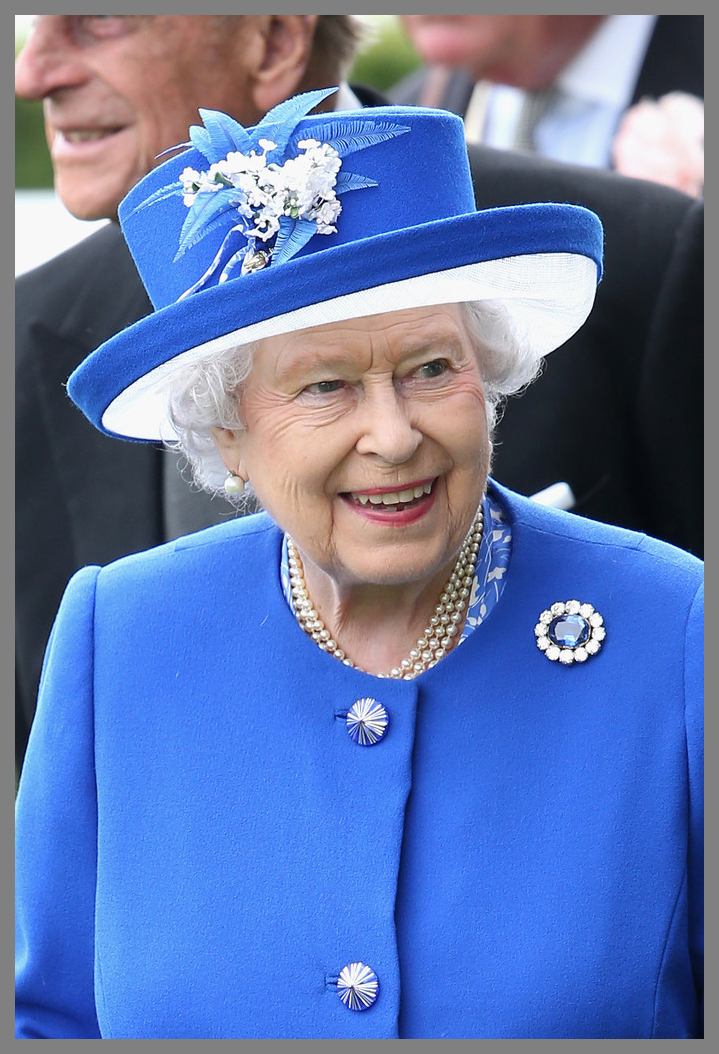 The brooch was originally given to Queen Victoria by Prince Albert on Feb. 9, 1840, the day before their wedding, and it can be seen in portraits of Victoria on her wedding day. The brooch then passed from Victoria to the queen consorts—Queen Alexandra, Queen Mary and the Queen Mother—and then to Elizabeth on her accession to the throne.

Memorable appearances for the Prince Albert Sapphire Brooch include dinner with President and Mrs. Kennedy at Buckingham Palace in 1961 and at the Christening of Prince William in 1982.

The Queen also inherited the elegant Empress Marie Feodorovna’s Sapphire Brooch. It features a dreamy cabochon blue sapphire surrounded by two rows of diamonds, as well as a detachable diamond and pearl pendant. 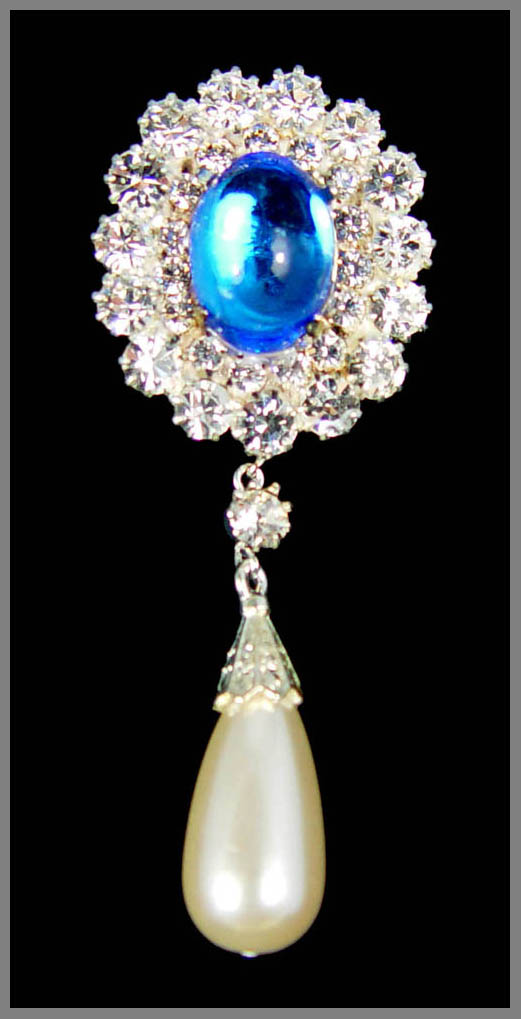 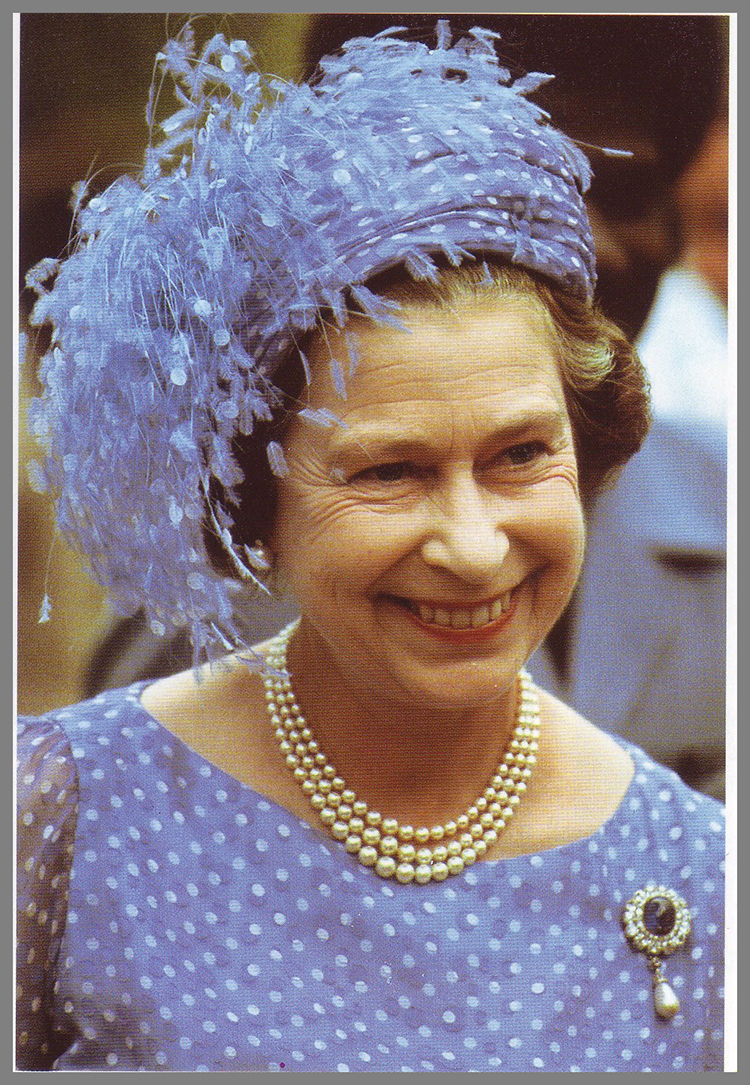 The brooch was among the jewels Elizabeth’s paternal grandmother, Queen Mary, purchased from the collection of Empress Marie Feodorovna, the wife of Alexander III of Russia. The Empress received the brooch as a wedding gift in 1866 from her sister and brother-in-law, King Edward VII and Queen Alexandra, whose son King George V, Mary married.

The Queen has worn the Empress Marie Feodorovna’s Sapphire Brooch both with and without the pendant at numerous events, including for the Audiences at Buckingham Palace and her annual Christmas Broadcasts. 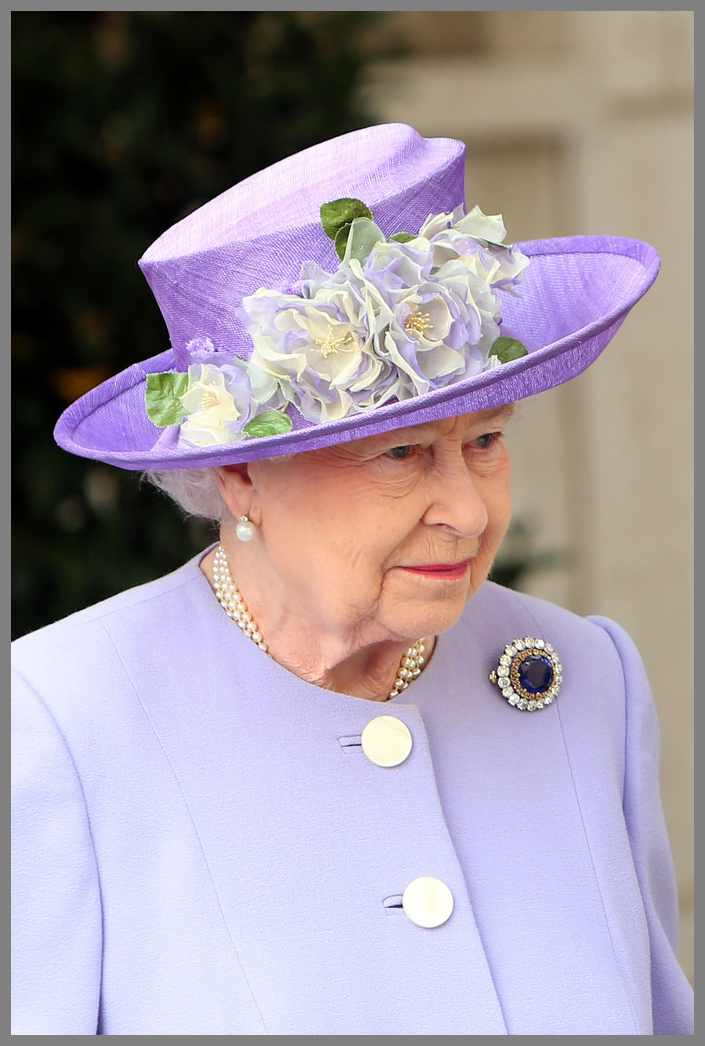 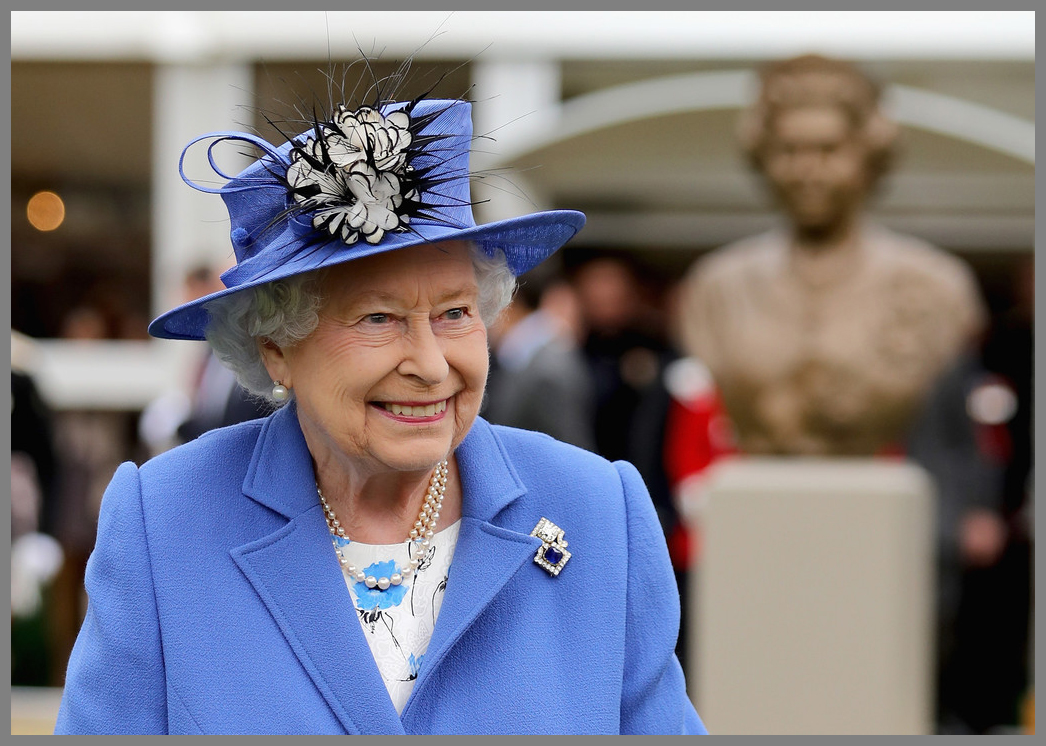 The Queen also inherited from Queen Mary the Russian Sapphire Cluster Brooch and Queen Mary’s Russian Brooch. The Russian Sapphire Cluster Brooch features a round blue sapphire surrounded by two rows of diamonds, the inner row of which is set in an intricate yellow gold setting. Queen Mary’s Russian Brooch, meanwhile, features a square cabochon blue sapphire and a square-cut diamond outlined by scrolls of smaller round diamonds.

The Queen received the Dubai Looped Sapphire Semi-Parure from Sheikh Rashid of Dubai during her 1979 tour of the Middle East. The set originally included an outstanding necklace from Asprey featuring a series of diamond loops alternating in size, with the larger loops encircling oval-shaped blue sapphires. Also included were a pair of earrings and a ring, each with a large oval-shaped blue sapphire surrounded by diamonds. 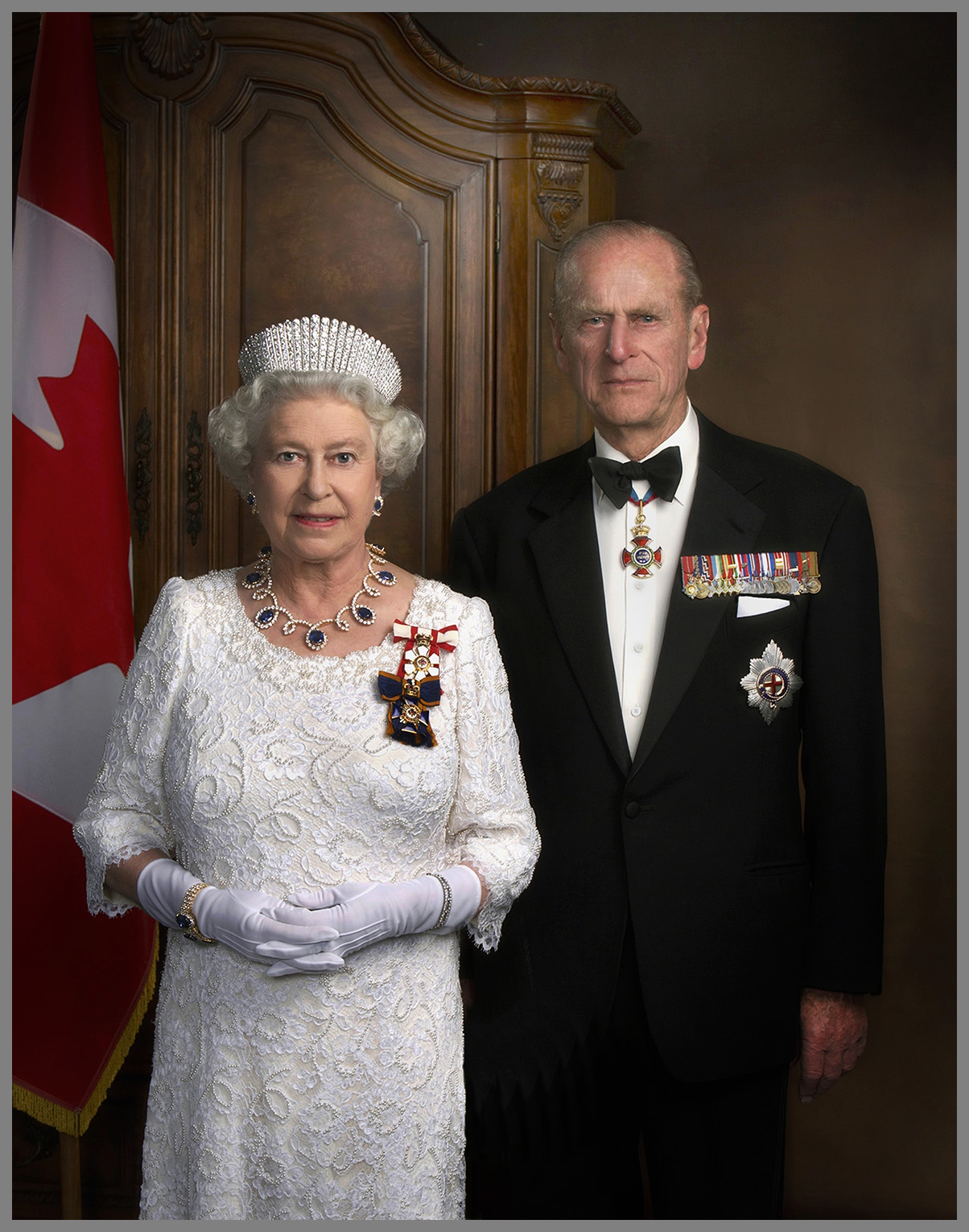 The Queen later had the necklace shortened and the extra links made into smaller earrings. The original earrings and the ring, meanwhile, were converted into a bracelet.

The reinterpreted Dubai Looped Sapphire Semi-Parure can be seen in its full glory in an official portrait of the Queen for Canada (above).

The Sapphire Chrysanthemum Brooch is one of the first gifts the Queen received when she was a princess, which is perhaps why it holds a special place in her jewelry collection. Given to her for launching the British Princess oil tanker in 1946, the brooch features a chrysanthemum with diamond petals and a center of numerous blue sapphires. 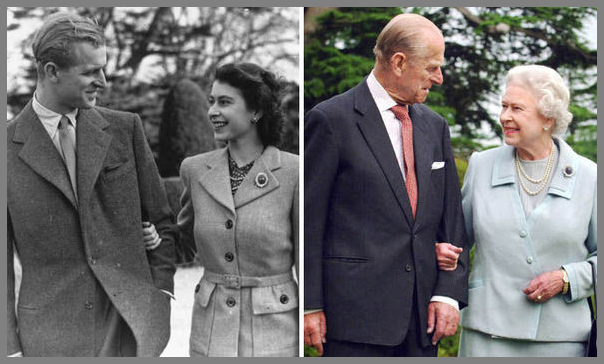 The Queen famously wore the Sapphire Chrysanthemum Brooch for her honeymoon photo and for the recreation of that photo for her 60th wedding anniversary (above).

Although more of a ceremonial object, the Imperial State Crown, part of the official Crown Jewels and worn by the Queen at each State Opening of Parliament, contains two of the world’s most legendary blue sapphires. At the back of the crown is the extraordinary oval-shaped Stuart Sapphire at approximately 104 carats. At the top, set within the cross pattée, is the octagonal-shaped rose-cut St. Edward’s Sapphire. 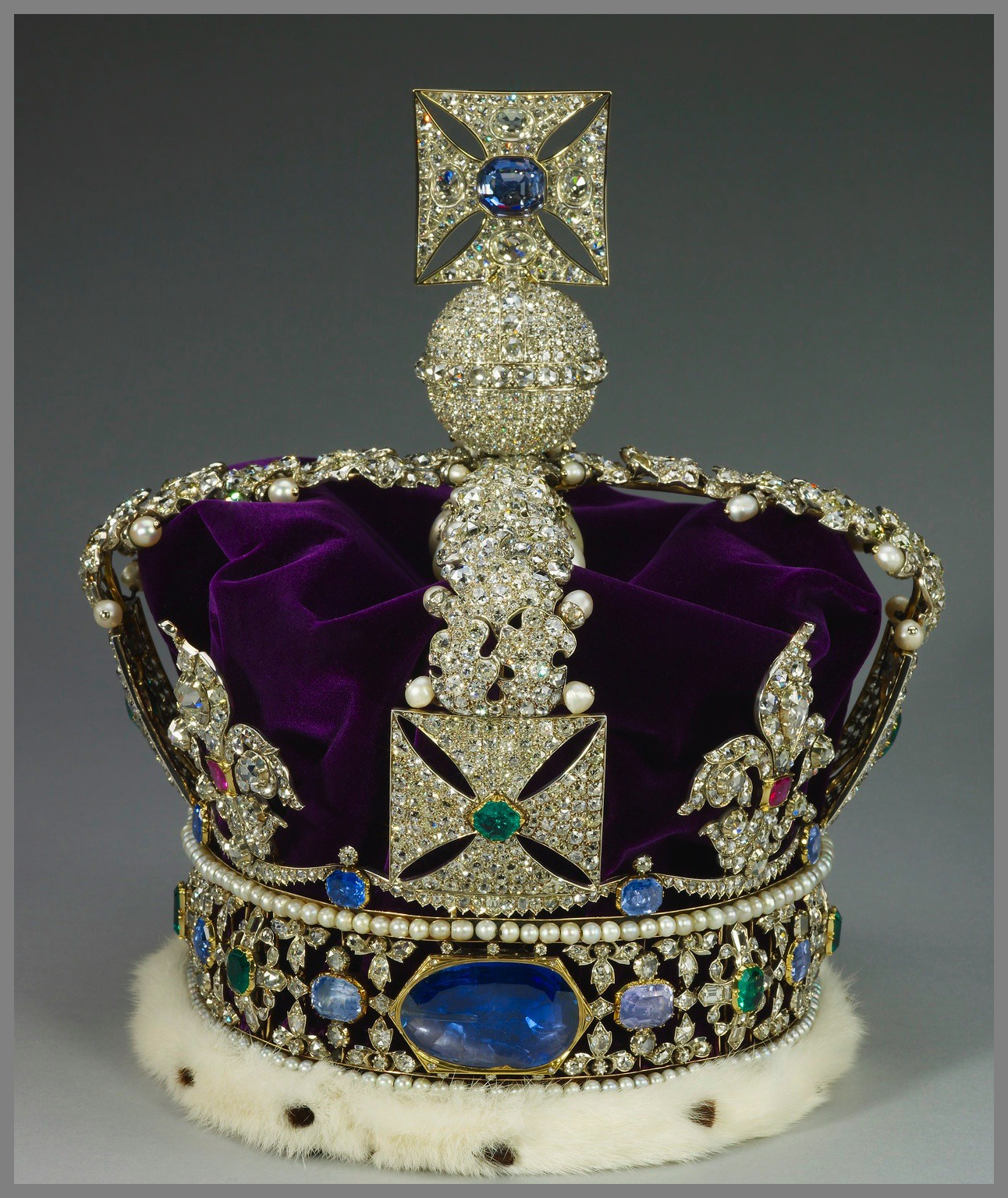 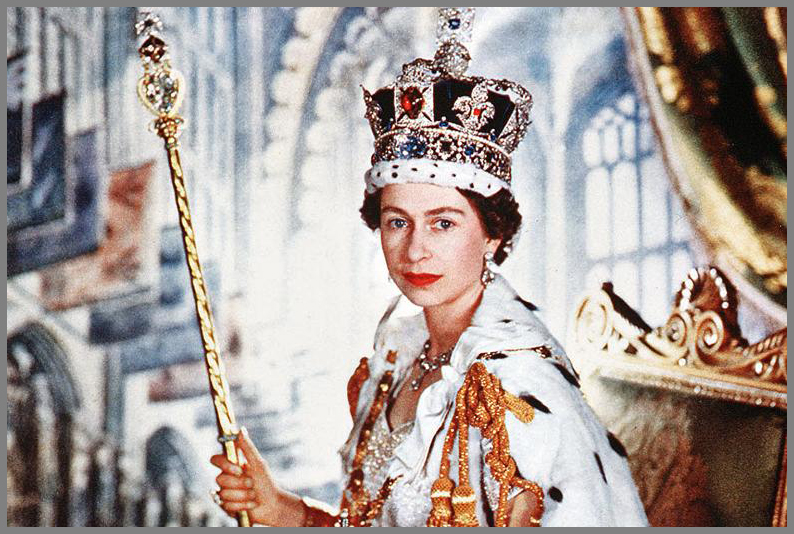 Perhaps the Queen also influenced Princess Diana’s taste in precious gems. Some say Diana chose her engagement ring from Prince Charles because she wanted a blue sapphire. The ring by Garrard, arguably the most famous engagement ring in the world, features a large blue sapphire in an oval shape surrounded by 14 round diamonds. 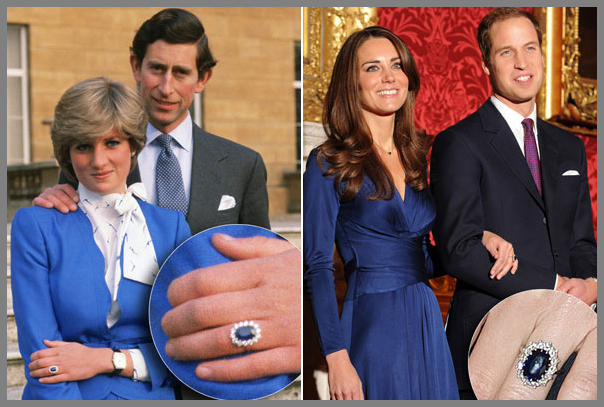 Prince William, of course, proposed to the Duchess of Cambridge Kate Middleton with the same ring, setting off a firestorm of replicas everywhere. No doubt this will ensure a spotlight on sapphires for the Royal Family and the rest of the world for centuries to come.

So do Her Majesty’s sapphire jewels inspire your inner Queen? Then contact The Natural Sapphire Co. today. We’ll give you the royal treatment!