When Hollywood legend and eight-times-married Elizabeth Taylor famously declared—“Big girls need big diamonds!”—it’s as if she sent an edict to the A-list that fueled their great love affair with the precious gem, particularly for their larger-than-life celebrity engagement rings. But what if Ms. Taylor had sung the praises of sapphires instead? Perhaps we’d be seeing that “something blue” on celebrity ring fingers everywhere. To help you imagine that, take a look below at several of today’s most iconic diamond engagement rings all decked out in “blue.” We’re sure you’ll agree—they’re even more spectacular! 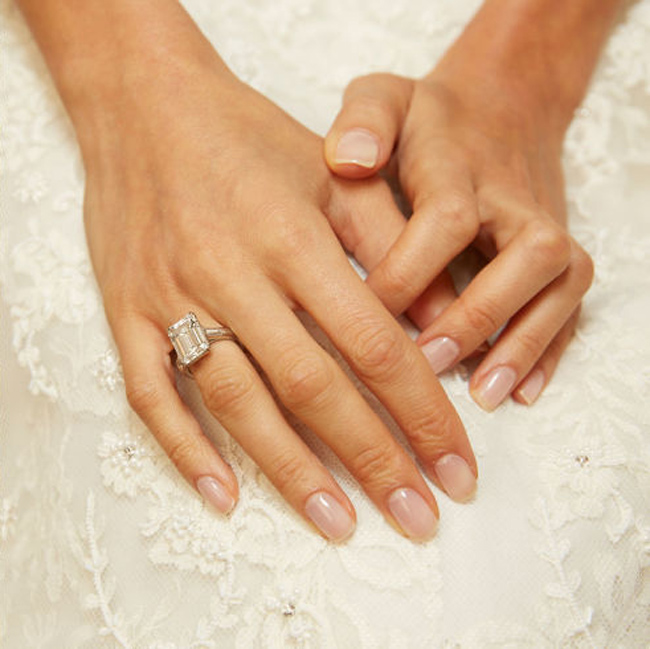 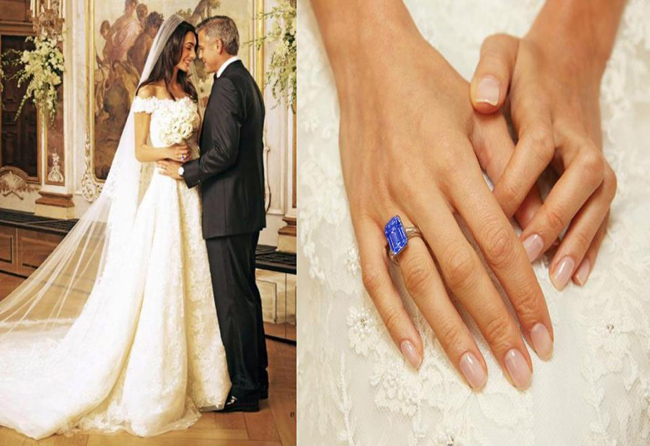 With a blue sapphire center stone, the ring really “comes to life” against Amal’s olive skin. Blue sapphires are also not as common in the emerald cut, making this ring even more singular and special. And since an ethically sourced diamond was an important consideration for George, he would be happy to know that our sapphires are also responsibly mined. 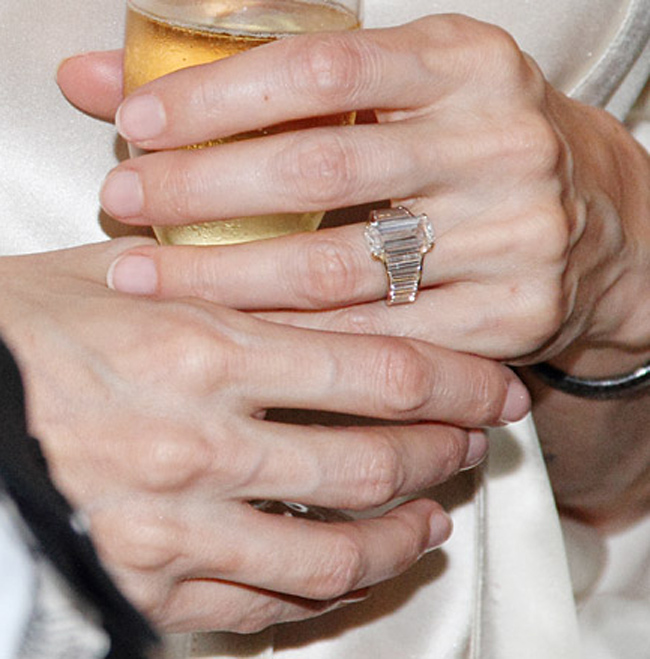 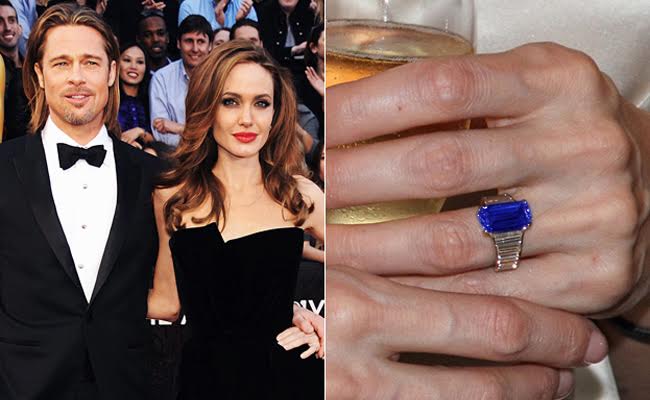 Here’s Angelina’s unique design highlighted with a blue sapphire center stone. Designed this way, the center stone really shines, especially because it’s strikingly set off with the diamond side stones instead of just blending in. 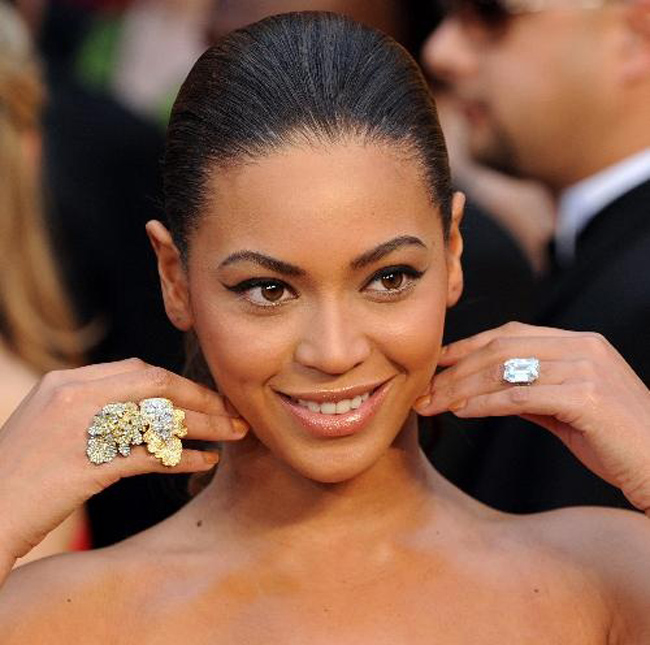 Renowned jewelry designer Lorraine Schwartz often gushes about Beyoncé being her muse, so it’s no wonder Jay-Z called upon her creative efforts to fashion an engagement ring for Queen Bey. Featuring an emerald-cut flawless diamond weighing a whopping 18-carats, the ring is reportedly worth about $10 million today. 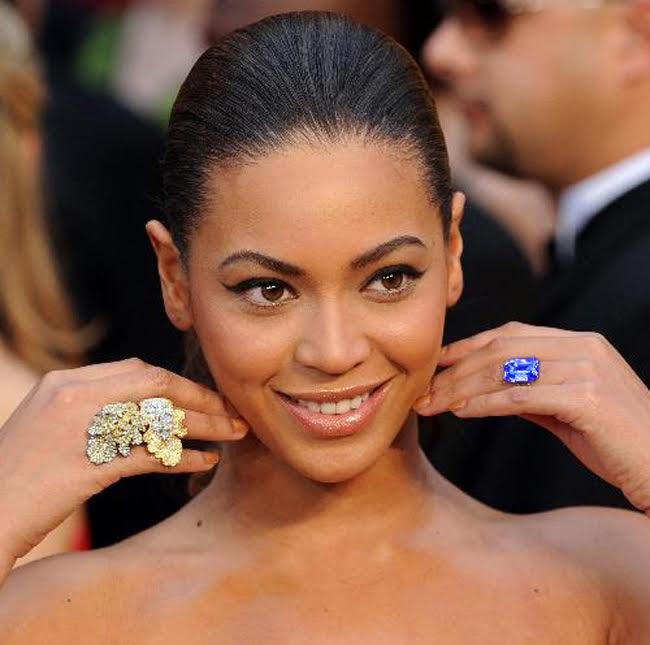 While there’s no denying how exquisite Beyoncé’s diamond is, a comparably flawless blue sapphire of this size with exceptional color would be jaw-dropping. Just look at how it appears on her hand. Add to that the significance of the color blue to the couple—with Jay Z’s beloved Blueprint albums and their daughter named Blue Ivy—and this ring just makes perfect sense. 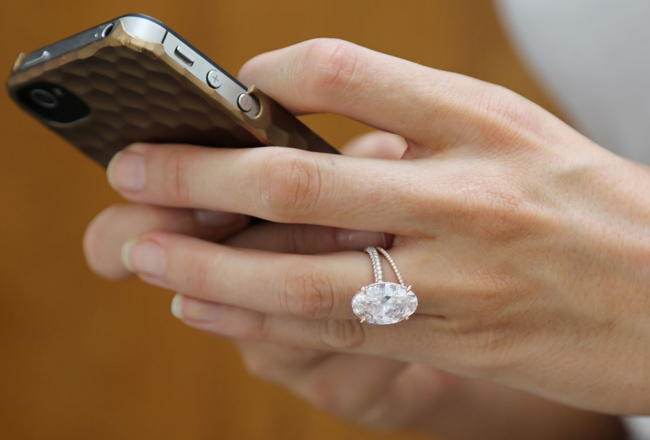 When Blake Lively got engaged to Ryan Reynolds, it was a bit of a surprise, but her gorgeous engagement ring was not. Also designed by Lorraine Schwartz, the ring features an oval-shaped flawless light-pink diamond weighing 7 carats set in rose gold with pavé-set diamonds along the band. 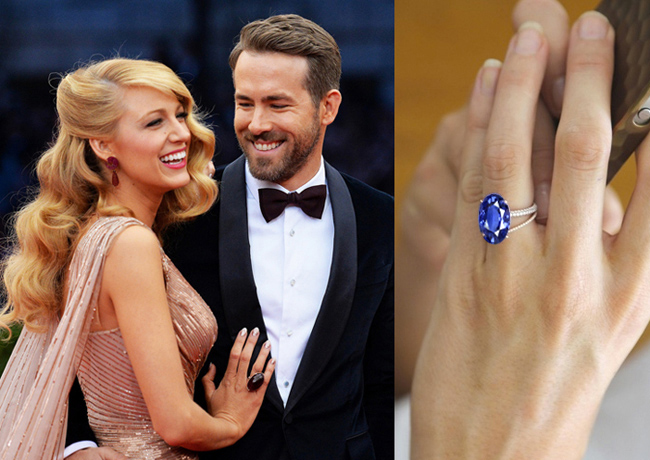 In our version of Blake’s ring, look at how beautifully the cool hue of the blue sapphire center stone complements the warm glow of the rose gold setting. The color also more clearly defines the oval shape, which gives the desirous effect of a longer and slimmer finger. As such, the ring is at once glamorous and trendy, perfectly suited to the stylish star. 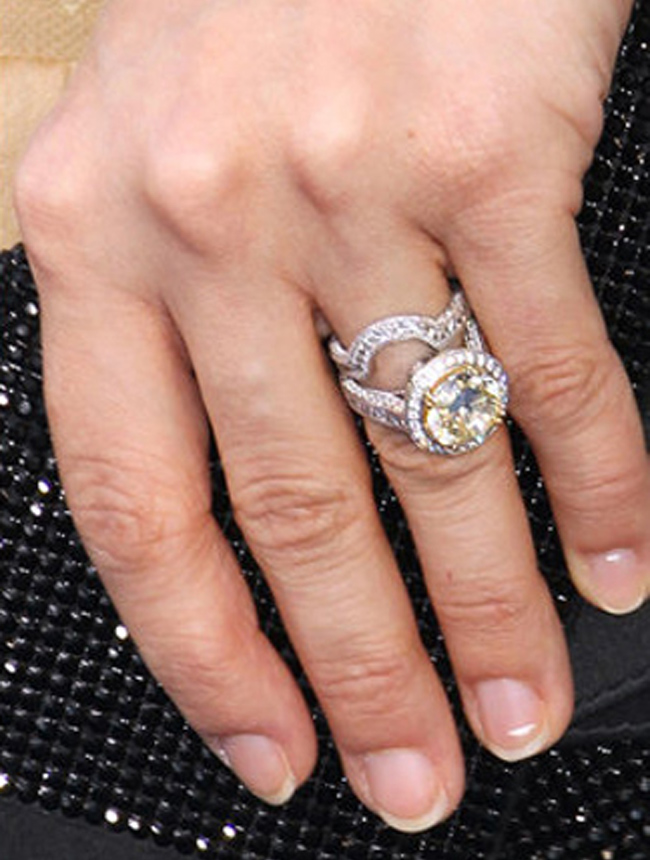 Hockey player Mike Fisher co-designed Carrie Underwood’s engagement ring with her favorite designer, Johnathon Arndt. At its center is a flawless yellow diamond of reportedly 5 carats, encircled with a halo of colorless diamonds. Diamond detailing on the band brings the total carat weight of the ring to supposedly 12 carats. 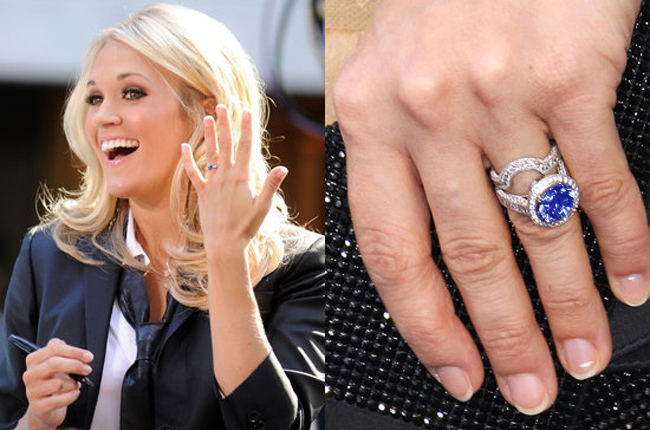 We here at The Natural Sapphire Co. love this look of the blue sapphire center stone surrounded by a halo of diamonds! After all, it’s reminiscent of the world’s most famous engagement ring, worn by The Duchess of Cambridge Kate Middleton. And since Carrie recently welcomed her first child—a baby boy—the “blue” takes on even more meaning. 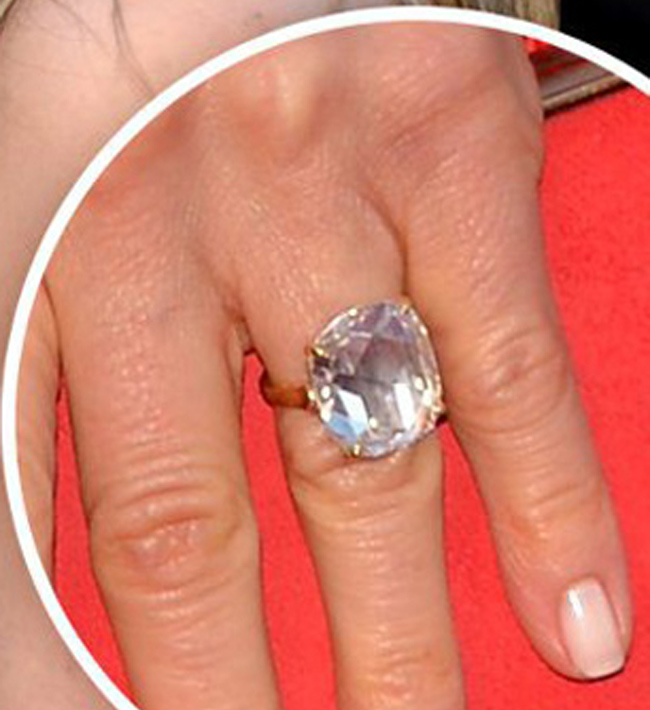 Jennifer Aniston had a lot to say yes to when boyfriend Justin Theroux proposed with this gigantic 8-carat diamond, in what appears to be the radiant cut, set in a classic yellow gold solitaire setting. 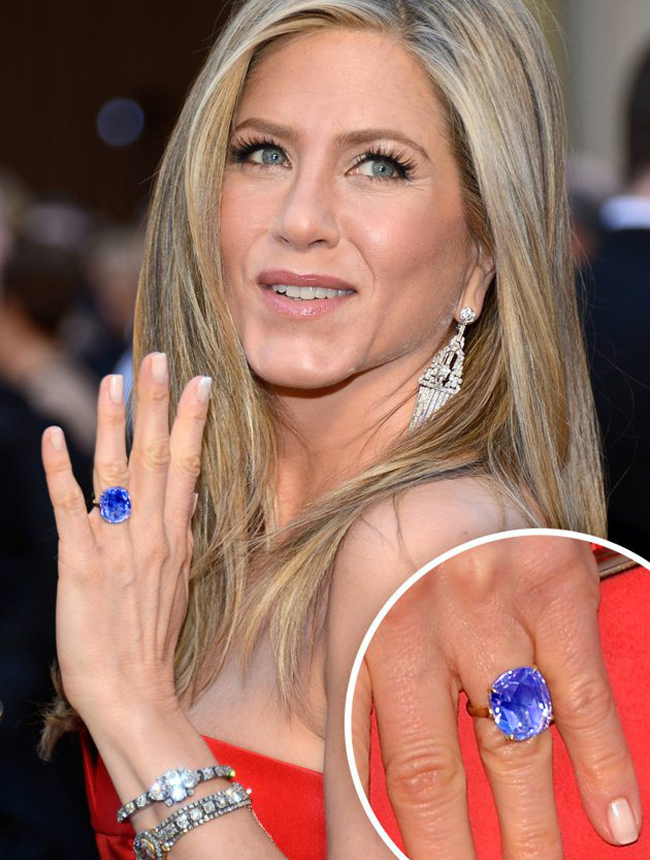 One look at Jen’s ring with a blue sapphire, however, and we would say, “Absolutely!” It’s utterly captivating, filling the space between her hand and knuckle with a pop of color that absolutely steals your attention from the diamond pieces she’s wearing. 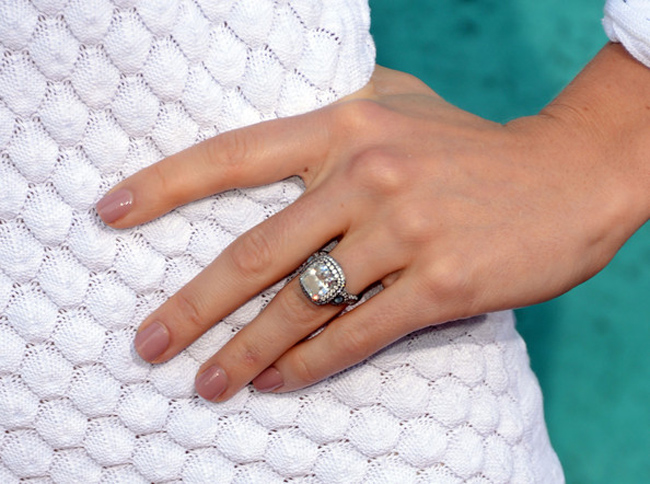 Justin Timberlake went for an antique look with the engagement he designed for Jessica Biel, particularly with the use of blackened platinum as the setting for a square cushion-shaped diamond. Other details include a double diamond halo, diamond and gemstone accent stones, and a scroll motif on the basket. 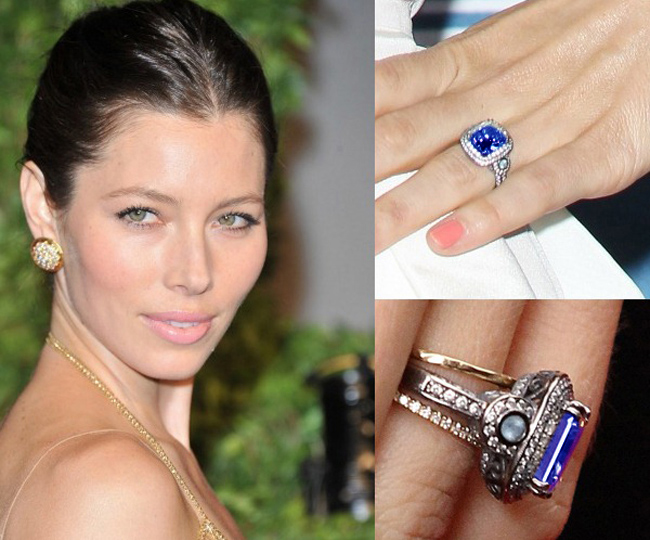 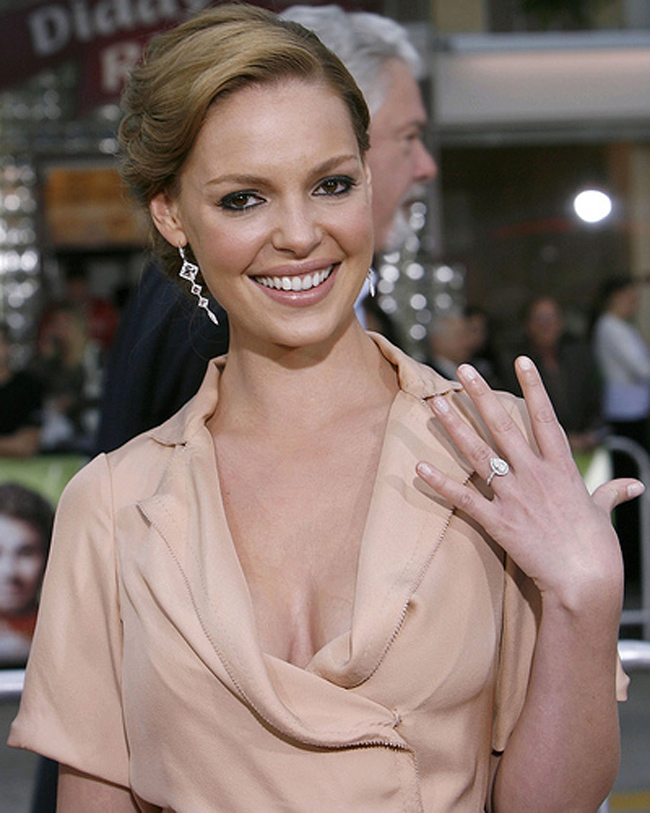 “It’s ridiculously big,” Katherine Heigl told Cosmopolitan of her 3-carat pear-shaped diamond ring from musician hubby Josh Kelley, designed by Ryan Ryan Jewelry. “I was like, ‘Sure, I’ll marry you!’” 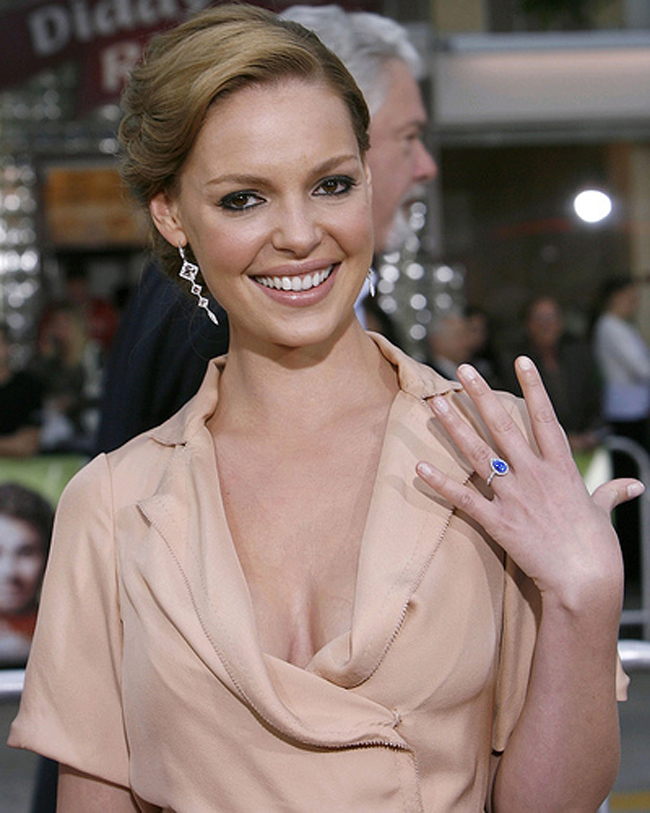 Imagine what Heigl would have said if she saw this blue beauty? Resembling a drop of the most beautiful blue water, the sapphire adds an undeniably elegant touch to the ring, perfectly showcased within a setting of sparkling pavé-set diamonds. 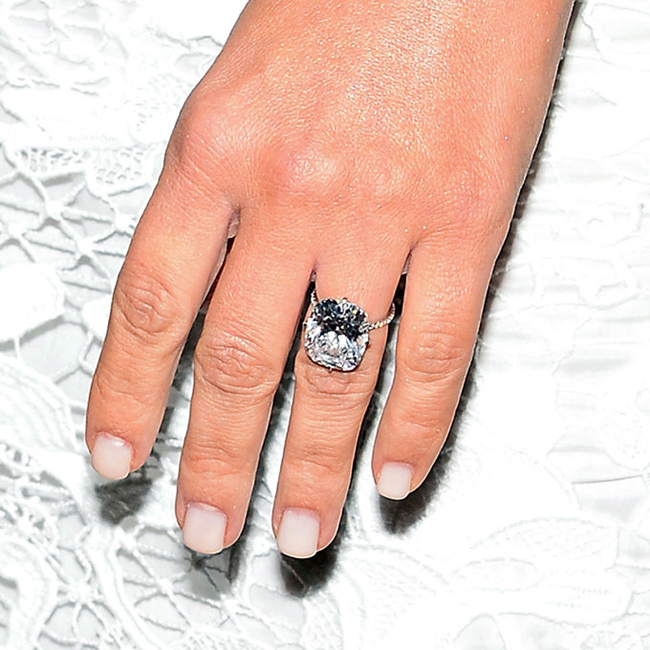 Kanye West reportedly spent a cool $8 million on this eye-popping 15-carat diamond ring for his wife, Kim Kardashian. According to designer Lorraine Schwartz, the diamond is the best there is. It’s absolutely flawless, with D color and an expert cushion shape. The diamond rests on a pavé-set diamond band so delicate, it fulfills Kanye’s wish that the diamond look as if it’s floating on air. 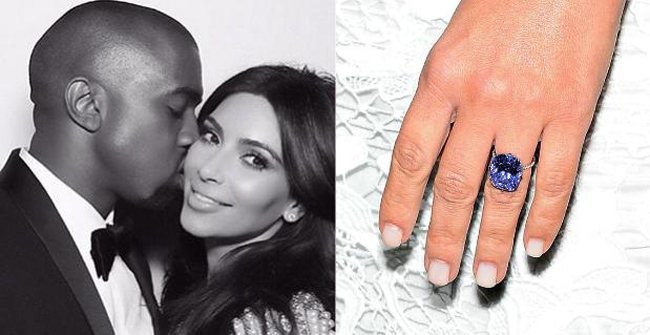 Let’s just say that with a 15-carat perfect blue sapphire placed in this setting, not only would the sapphire look like it was floating on air, it would look like the sky itself! 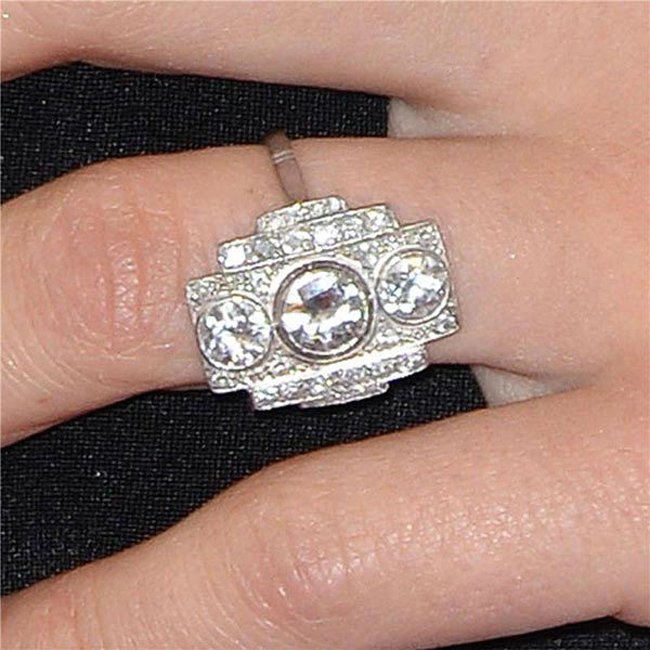 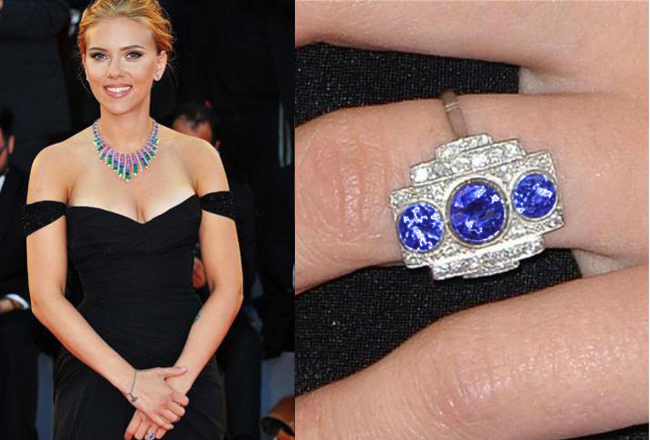 Blue sapphires in Scarlett’s setting are trés chic, providing a stunning contrast with the diamonds that allows you to fully enjoy the vintage setting. 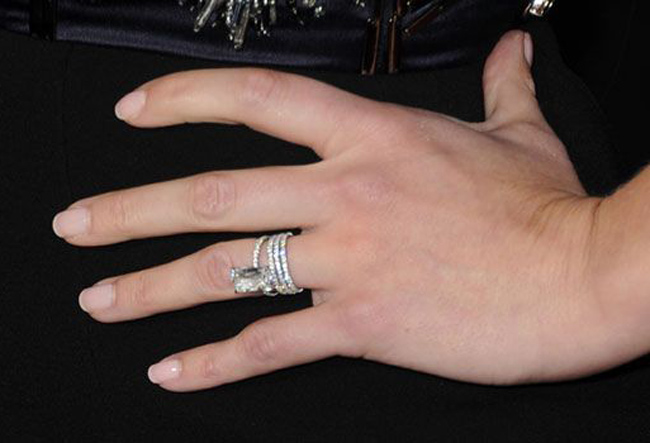 When Jim Toth proposed to Reese Witherspoon, he presented her with a 4-carat Ashoka-cut diamond ring set on a platinum band pavé-set with diamonds, created by jeweler William Goldberg. 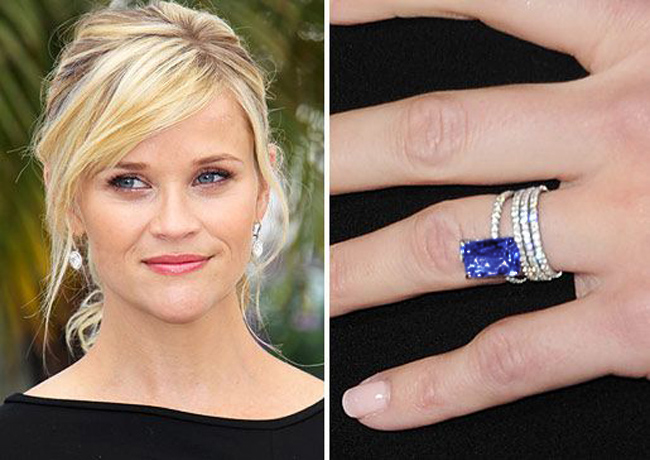 Envisioned with a blue sapphire sparkler, coupled with all of those diamond bands, Reese’s ring looks like the evening sky twinkling with stars. It also picks up the color in Reese’s eyes. Also interesting to note: Up next for Reese? The movie, Pale Blue Dot.

So now that you’ve seen the diamond engagement rings of your favorite celebrities envisioned in blue sapphires, what do you think? Do you have a particular favorite? Does this make you more or less likely to choose a blue sapphire for your engagement ring? Join the discussion below!