The Ultimate Nerdy Proposal
Back to Top
We Are Open For Business - Corona Virus NoticeX
Free Worldwide Shipping, Tax-Free & 14 Day No Hassle Returns*
Over 1100+ Reviews and Counting!
Need Help?       Contact Us & Showroom
Showroom

Working at the Natural Sapphire Company I have heard a lot of unique proposal ideas and stories from our clientele that have purchased engagement rings from us in the past but this story is a breed of its own. Corny? Yes! Nerdy? Definitely? Perfectly adorable and endearing? Absolutely!

Bernie Peng a true romantic but also a self proclaimed nerd was determined to have a unique proposal for the love of his life Tammy Li. Thinking about it for sometime he realized he wanted something that was not traditional but would represent their one of a kind relationship. So he decided to create Li’s favorite game “Bejeweled” for the Nintendo DS system he had purchased for Li for a valentine’s day gift last year.

Peng spend about a month in his spare time cracking the games software and then developing it for the Nintendo system since the game had not been made for DS.  His version of “Bejeweled” was set for when a certain score was reached the screen would go black and a pink sapphire engagement ring along with his wedding proposal would drop down. 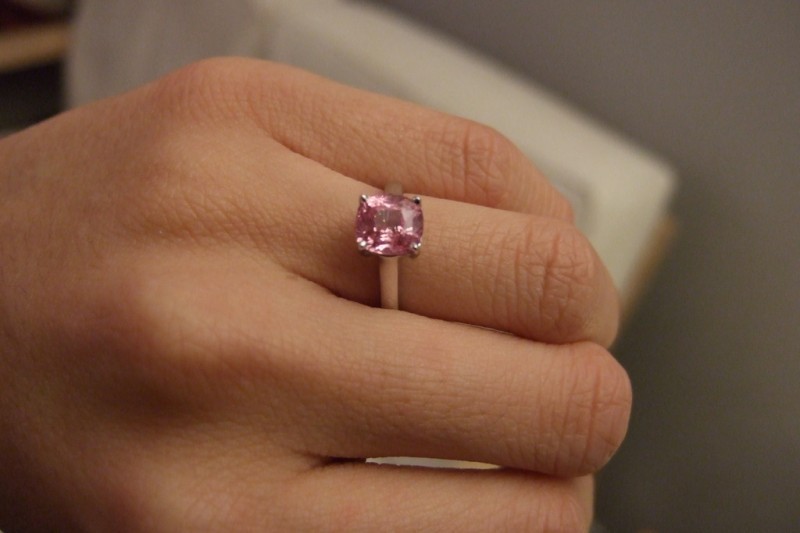 Her pink sapphire engagement ring matches the sapphire ring created for her on her video game.

Peng posted the proposal story on his personal blog, and the story instantly begun drawing attention and being circulated. The company that manufacturers the game got wind of the story and contacted the happy company.

“Most video game companies would frown on people manipulating their games,” said Garth Chouteau, a spokesman for PopCap, the Seattle company that manufacturers “Bejeweled.”

Share your proposals with us here at the Natural Sapphire Company Blog.

Lost My Mind When I Saw The New Tanzania Ruby!
Padparadscha!