The BEST service in the industry- Best Reputation Review

I’ve been a satisfied customer of the Natural Sapphire Company for the past 8 years. I’ve purchased individual stones and had them mounted on custom designed jewelry. The NSC does everything in house so their turnaround time is kind of astonishing compared to many other jewelry shops and their response time to questions and throughout the entire process is awesome.

I first went to them for an engagement ring. 3 stone emerald cut white sapphires on a custom white gold mounting. My fiancé at the time wanted me to have a ring he could strut about showing off and a show stopping ring is what we got. A few days after wearing it, one of the little decorative side stones (not the center stone which I selected from a handful of special stones) started turning a little yellow in the sun and I brought it back. It turns out some untreated stones lighten after having been stored in a vault for years. So they appeared white, when they weren’t actually white stones. The NSC replaced that stone quickly and I never had a problem again. I also had a men’s engagement ring made out of a beautiful black star cabochon sapphire at that time.

That relationship didn’t work out and the NSC took both rings back (no shade, I paid for them and he broke my heart so they were mine). They gave me a credit for the value of my ring (and I’m sure would have done it for both rings but I wanted to keep the black star sapphire) and remounted the black star sapphire into a custom designed pendant so I could wear it. I used the credit from my ring to select another stone, one that I spent over an hour picking out, this time a beautiful emerald cut deep blue sapphire, that was not very big but the color just spoke to my heart. I had it mounted onto another custom designed ring with my directive that I wanted a sharp and pointy ring to signal STAY AWAY. The NSC had to custom cut some side sapphires into points for this piece and they once again, amazed me with the beautiful work they had done.

A few years later, I was mugged and had my black star sapphire pendant ripped off of me. The police asked me for any specific information about it and the NSC emailed me within the hour I notified them, with all the descriptive information about the stone and the pendant. Talk about amazing turnaround time when you really need it.

Fast forward to just a few months ago. I’m engaged again (this time to someone way more awesome!) and the NSC was once again able to help us out. I had found a ring I positively swooned over made by an indie designer in NYC. My fiancé and I visited her shop and spoke to a salesperson. They had the ring I saw with an emerald cut diamond, in stock. I tried it on and almost swooned in the store from the design but I have a thing against diamonds, so no actual swooning. (My thing against diamonds is purely economical. Ever since the “discovery” of Africa. Diamonds are not rare. Their pricing is kept artificially inflated. If I’m going to spend a lot of money, it will be for something with actual value and not just great marketing. Also the Kimberly Process is a joke.) I asked the salesperson about substituting a center stone. She said she would ask her production team and promised to get back to us. She asked us what our budget was and we told her our small budget amount. We came up with a plan and a price at the top of our budget range. (I was going to cannibalize the sapphire on my pointy ring for the center stone.) I emailed her a few questions and she never responded. My fiance emailed her to ask when we could get started on the ring and she never responded. I called in and we were told to go back into the store again to drop off my ring. We showed up for our appointment and our salesperson basically described a completely different ring. As though we hadn’t just spent all that time outlining what we wanted! :/ I went over again what we wanted and then she tells us that it would require the designer to do it and would then cost “a lot” and named a figure over our budget. I asked when the designer would be available and our salesperson said she would get back to us and (surprise!) never did. To say we were frustrated was an understatement. I called the store to ask if we could use a different salesperson and the person who answered asked who we were working with, I told them her name and I was told that no one else at the store could help me, I had to keep working with her. Win for salesperson solidarity but LOSS for the customer. We gave up after 3 months of trying to work with them.

Since we had a small budget I had assumed the NSC was out of our budget but after all of these frustrations with this indie designer’s salesperson, I reached out to my contact Su Su, at the NSC. I explained our desire for a ring and our experiences with the famous ring designer’s store. Su Su delivered yet again. Not even a week had passed and she had CAD renderings for me to view and a quote well below our original budget, blowing the indie designer’s salesperson’s quote out of the water. My fiancé, who was copied on our extensive email conversations about design and production, PM’d me during this process to ask, “Is this how ordering a custom piece is supposed to be or are they just extra awesome?” I answered that it should be this easy and stress-free and yes, Su Su and the NSC are AMAZING.

2 weeks later, the ring was done, to custom specs, and within their original price quote. It is GORGEOUS and my fiancé and I could not be more pleased. TL; DR? No matter your budget, check out the Natural Sapphire Company first and save yourself a lot of time and frustration. They are the BEST. I’m never going to bother checking for jewelry anywhere else. 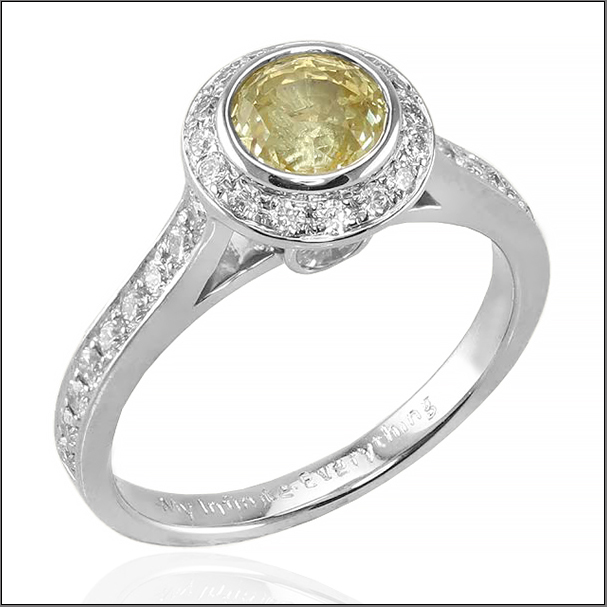