Often I am asked what is the ‘largest’ and ‘most expensive’ sapphire?

The largest sapphire in the world is probably still well protected underground, and maybe it is a billion karats or more, but will it be a ‘fine’ sapphire?  That is very doubtful.  What is rare and costly in a sapphire is a combination of its color, clarity, size, cut and of course if it has been treated in any manner. ?
I think that some of the rarest sapphires  we see are our 1-2ct size rare color sapphires, many of these are irreplaceable and are literally more rare than the sapphire below:

The World Record price ever paid for a sapphire (any color) is the 22.66ct Blue Sapphire sold at Christies Auction House in April 2007.

The following details is from Christie’s Auction House: 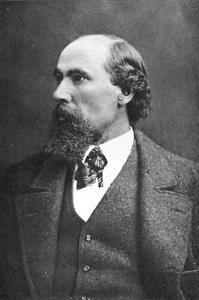 An Exceptional Sapphire Sold on Behalf of the Minnesota Historical Society

A great figure of America’s Gilded Age, James J. Hill (1838–1916) was one of the wealthiest and most powerful industrialists of the late Nineteenth and early Twentieth centuries. He was best-known as the builder of the Great Northern Railway (now the Burlington Northern Santa Fe) and was involved with banking, agriculture, copper and iron-ore mining, and the timber and milling industries in the Northwest.

Mr. Hill came to St. Paul at age seventeen from Ontario and soon established himself in the shipping business on the Mississippi and Red rivers. He married Mary T. Mehegan in 1867 and had ten children. At the time of his death in 1916, James J. Hill had amassed a personal fortune of $63 million, plus $200 million in related assets. His collection of French Barbizon and Romantic artworks forms the core of the European paintings at the Minneapolis Institute of Arts, and his St. Paul home is now a National Historic Landmark owned and operated by the Minnesota Historical Society.

Along with his collections of landscape paintings, bronze sculpture and rare books, Mr. Hill collected gems and jewelry for his wife and children as well as for investment purposes. This remarkable Kashmir sapphire of 22.66 carats was set as a pendant and was incorporated into a necklace purchased by James J. Hill for his wife in 1886. At the time, he paid $2200 for the sapphire pendant. The necklace was later dismantled and given to various Hill children. The pendant remained with one of the daughters, Gertrude Gavin, who gave it to her sister Rachel Boeckmann. After her death, the pendant was left to one of her daughters who later donated it to the James J. Hill House Historic Site in 2006.

The Kashmir sapphire conjures up only one image in a collector’s mind: its unrivalled, magnificent blue color. This mesmerizing stone of significant size is perhaps one of the most important sapphires currently on the market and is unsurpassed in richness and life.

DESCRIPTION
AN ANTIQUE SAPPHIRE AND DIAMOND PENDANT
Set with a cushion-cut sapphire, weighing approximately 22.66 carats, within an old European-cut diamond surround, mounted in gold, circa 1886.

With report 0702554 dated 20 February 2007 from the Gübelin Gemmological Laboratory stating that gemological testing revealed characteristics consistent with those of sapphires originating from Kashmir. No indications of heating.

Accompanied by an appendix stating that the 22.66 carat natural sapphire described in this report possesses a combination of outstanding characteristics. Besides its large size, this extraordinary gemstone displays a richly saturated and homogeneous colour, combined with a very high degree of transparency. The pleasant shape and finely proportioned cut provide many vivid, internal colour reflections and the high clarity of the gemstone makes it practically eye-clean. In addition, this remarkable gemstone has been spared of thermal treatment.

Natural, non-enhanced sapphires from Kashmir of this large size, endowed with such intrinsic qualities as a high clarity and transparency, combined with a saturated colour and a fine cut, which compliments its visual appearance, are very rare.

With report 91017610 dated 24 January 2007 from the AGTA Gemological Testing Center stating that the data obtained during the examination of this natural untreated blue sapphire indicates that the probable geographic origin is Kashmir. No indications of heating. 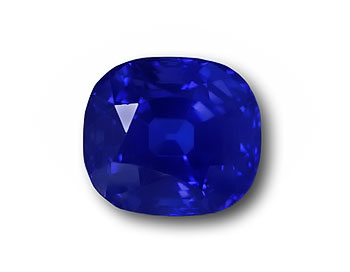 Answering your questions on treatment detection.
Burmese Embargo on Gemstones