While diamonds are thought to symbolize strength and eternity, and sapphires represent truth & fidelity; rubies with their fiery red hues, since their first discovery, have symbolized romance, passion, and undying love. Combining the color of fire that has warmed us since Man first struck two rocks together, the color of the blood that rushes through our veins keeping us alive, and the intensity of our hearts, and deepest emotions; rubies are today, as they have been for centuries, one of the greatest tangible treasures of mankind representing the greatest intangible treasure of mankind – Love. With their striking contrast to the brilliant white light of diamonds, it is no wonder that ruby engagement rings continue to catch the eyes of both the women who want them and the men who buy them. 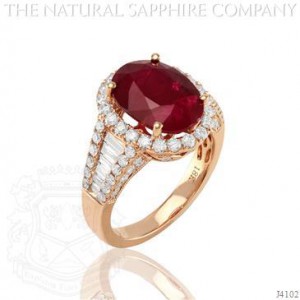 Sister to the sapphire in the same Corundum family; rubies are 9 on the Moh’s Scale of Hardness, second in hardness to the diamond, and like sapphire make an exceptional choice for the center stone or as side stones for a diamond or sapphire engagement ring. What does the ruby have that the sapphire doesn’t? Other than the dominate red hue that gives the ruby its distinction, rubies in sizes over 4 or 5 carats are extremely rare. Add that to The Natural Sapphire Company’s forte of untreated rubies and sapphires, and what you will have for a ruby engagement ring will not only be a symbol of your love and devotion, but a true treasure of nature and fine jewelry design.  Though the rarity and value of an untreated ruby over 5 carats may sound daunting to some, the rarity and value of an untreated natural ruby is still great for stones under 5 carats. And even if a ruby had its color and apparent clarity improved by common heat treatment, it is still a ruby to be appreciated for its beauty, it’s natural formation, and the incredible path it took to get from the miner’s hand to yours. 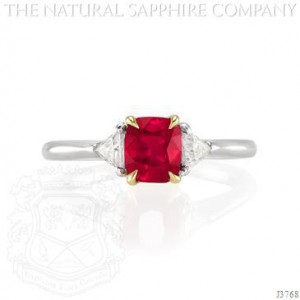 There was a time, long ago, when only Kings and Queens, and those of nobility were allowed to own rubies. Then again that was also the time when engagement rings of the common people were often whatever could be wrapped around a finger. Fast forward to the present when we can all have the ruby engagement ring prized for generations and forever standing for eternal love. Whether you’re in the market for an untreated 1.18ct ruby engagement ring accented by the warm glow of 18k yellow gold, or a rare-does-not-even-begin-to-describe 5.55ct unheated Burmese ruby set in platinum; look no further than The Natural Sapphire Company. We have a ruby engagement ring for everybody. 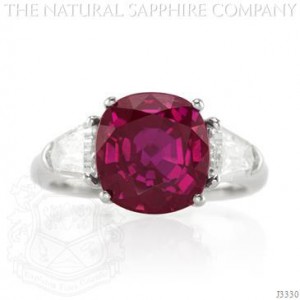