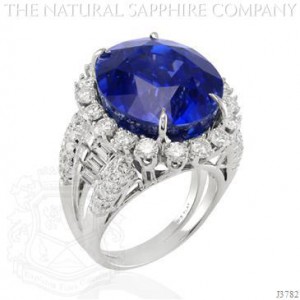 Just as the first flowers of spring have begun to bloom, so have the incredible spring auctions of magnificent jewelry. When you see that beautiful blossom bloom, you wish it would last forever; that winter will never come again. When you see the walnut sized rubies and sapphires selling at auction, and realize that their ravishing reds and tranquil blue will last forever; that with each change of season another is sold again, its value often greater than before; its story, as well, completely different. It seems every spring we hear of the record breaking auctions, just as April showers, bring May flowers – our eyes are on the color and the carats.

At Sotheby’s Magnificent Jewels and Jadeite Auction held in Hong Kong on April 7th, there was a record breaking sale of a 29.62ct oval Burmese Ruby in a Cartier mounting. Selling for $7.3 million, the record was broken for a single ruby sold at auction.  However, $7.3 million doesn’t seem like too much compared to the other record breaking sales of the auction.  The “Red Emperor,” a ruby and diamond fringe necklace consisting of 104.51ctw of heart and pear shaped “Pigeon’s Blood” Burmese rubies sold for $9.9 million – a world record for a ruby necklace at auction. And finally, while not a ruby or sapphire focus, though including a ruby set clasp; the record breaking sale of the Jadeite necklace should be mentioned. Made of 27 graduated Jadeite beads, and a ruby and diamond clasp; the necklace sold for more than double its estimate with the hammer coming down at $27.4 million!!!

While some of the most incredible jewelry in the world was being sold at this auction – jadeite, emeralds, and rubies; some of the finest and most rare sapphires in the world were also selling for huge numbers. At 102.61cts, the biggest sapphire necklace at the auction was listed with an estimate of $2.8 – 3.8 million and ended up selling for $4,203,118.  Any takers out there for The Natural Sapphire Company’s 69.35ct  “Titan’s Eye” – going once, going twice….

While it didn’t steal the show, or break any records, my personal favorite from the Sotheby’s auction was the 20.04ct Kashmir Sapphire ring – the vision and epitome of rarity and beauty that sold for $2.6 million. Hopefully, I’ll have at least that much cash ready the next time it comes up for auction.