While the world anxiously awaits the birth of The Duke and Duchess of Cambridge’s second child in April, the guessing game continues. Whether the fourth in line for the British throne will be a boy or a girl is the hot question. Since the couple’s first child was a boy, everyone is “thinking pink” this time around hoping for a royal princess. We are as well, we’ve picked pieces from our inventory that would be fit for a princess, especially one from a Royal Family with a penchant for blue sapphires. So what do you think of our choices? Take a look below and let us know.

Brooches are a signature piece of jewelry for both Queen Elizabeth II and The Duchess of Cambridge Kate Middleton, with each wearing designs in every conceivable material and motif, and often with great historical, political and sentimental significance. 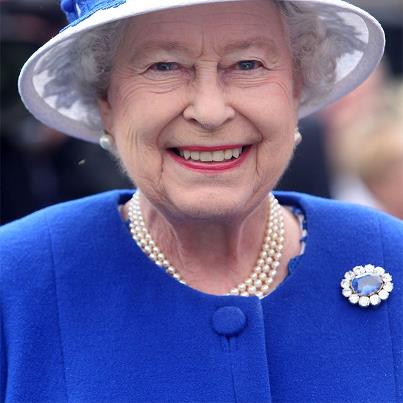 One of the most famous brooches in Queen Elizabeth’s collection, for instance, is Prince Albert’s Sapphire Brooch, also known as Queen Victoria’s Wedding Brooch. The jewel features a large oblong blue sapphire surrounded by 12 round diamonds, and was first was given to Queen Victoria by her husband, Prince Albert, the day before their wedding in 1840; famously worn on her wedding dress. Queen Elizabeth has also worn the brooch on memorable occasions, including dinner with President and Mrs. Kennedy at Buckingham Palace in 1961, and at the christening of her grandson William in 1982. 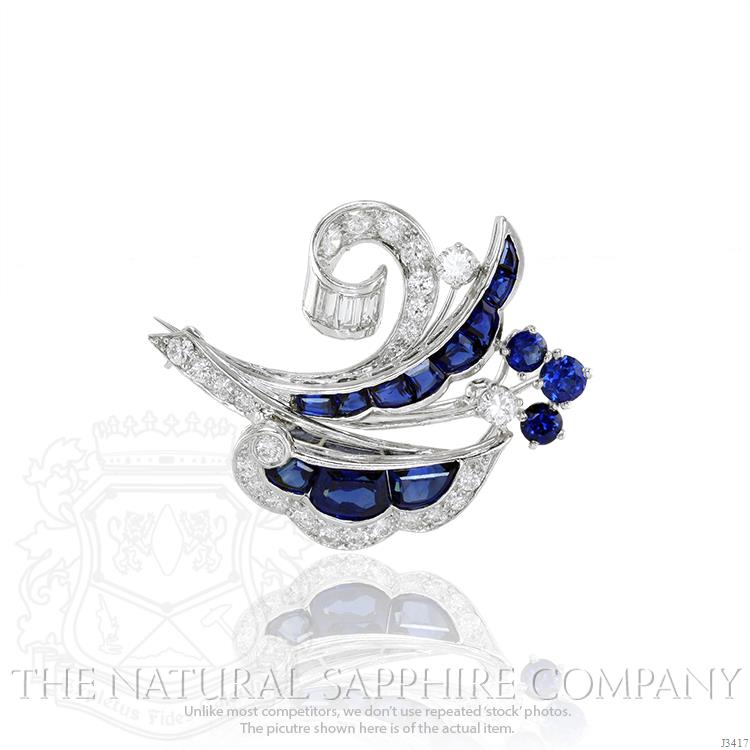 A Blue Sapphire Brooch Fit For A Future Princess

The little princess can carry on the tradition with our dainty blue sapphire and diamond brooch with a delicate floral motif. The brooch features 14 heated blue sapphires from Sri Lanka (formerly Ceylon) weighing 2.50 carats, and 28 diamonds weighing 1.25 carats, all brilliantly cut in various shapes and set to resemble tiny buds blossoming from unfurled leaves. An 18-karat white gold pin-stem and catch will keep the brooch securely fastened to her clothing as she can make all of her introductory appearances.

There’s no doubt Kate Middleton is amassing quite the jewelry collection, but a particular pair of earrings has found favor with the future queen: drop earrings featuring round-shaped blue sapphires encircled with a halo of diamonds, the design of which closely resembles her engagement ring. What’s also significant about the earrings is they originally belonged to Princess Diana, although in stud form, which the Duchess had altered into the more modern drop look after receiving them as a gift from her husband. 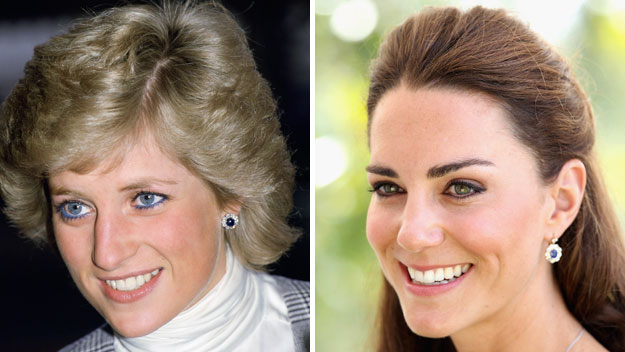 Our blue sapphire and platinum ear clips also closely resemble Kate’s engagement ring, spotlighting natural blue sapphires from Sri Lanka in the oval shape, surrounded by 22 brilliantly cut diamonds of various shapes totaling 6.68 carats. What’s so special about these earrings is that they showcase not one, but two sapphires that combine all the most sought-after qualities of the gemstone—the finest hue unenhanced by heat-treatment, excellent color saturation and clarity, an impressive size and a superlative origin—making them truly exceptional and an extremely rare find.

Sapphire Earrings For A Princess

We think these earrings would make a fitting gift for the future princess in her coming-of-age celebration such as a 16th birthday. Not only does the grown-up style honor her mother and grandmother’s jewelry choices, but it also includes two pear-shaped diamond drops, which is April’s birthstone; the stone of the future princess if Kate is to deliver a girl later this moth.

As she passes into adulthood, the princess will no doubt have a very busy schedule of public duties and charitable endeavors that will take her around the world. Our blue sapphire bracelet would be a worthy accessory for the most formal of engagements. It’s composed of 48 expertly matched natural blue sapphires from Sri Lanka totaling 38.05 carats, with a deep-blue hue that’s been enhanced with heat treatment. The vivid color intensity of the sapphires guarantees a consistent hue at every turn. Complementing the oval-shaped sapphires are 202 brilliantly cut diamonds of various shapes weighing 14.17 carats. 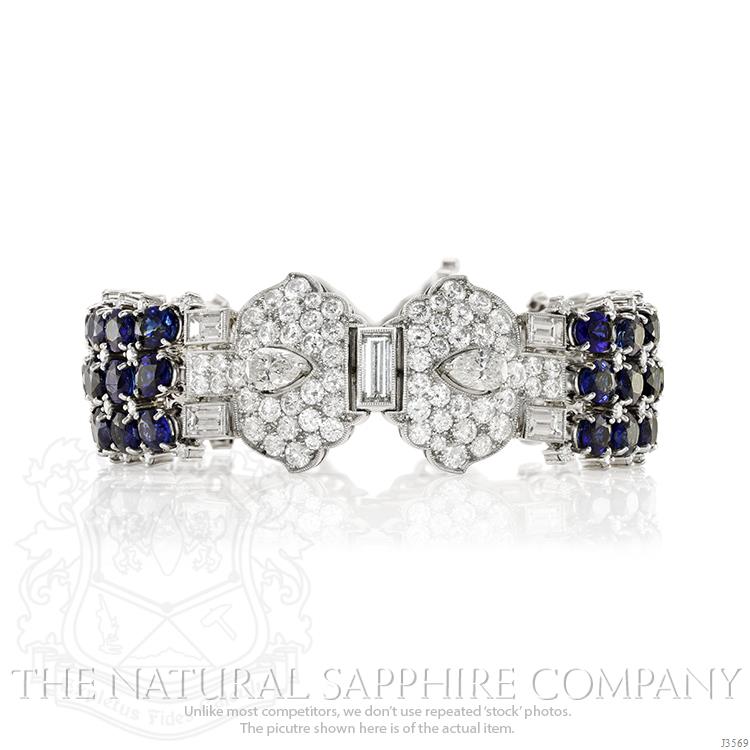 A Blue Sapphire Bracelet Fit For A Royal Princess

Together, the sapphires and diamonds create a pattern reminiscent of the Art Deco period, when designs were distilled to geometric essence, resulting in a cleaner, more rigid lines. The period also saw the use of platinum in jewelry, which is remarkably pliable, yet heavier and stronger than other precious metals, allowing it to be formed into intricate items. A fascination with the design styles of other countries such as Egypt and India also influenced the jewelry of the period, making this bracelet an important choice when representing Great Britain to the rest of the world. 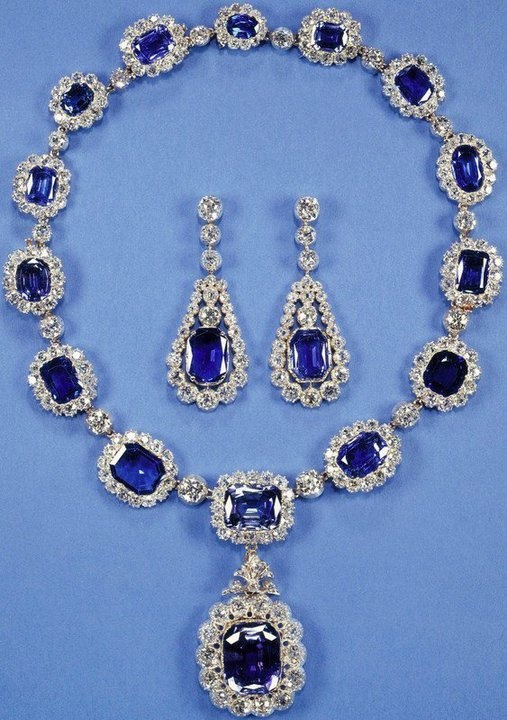 The George VI Victorian Suite is another notable set of jewels in Queen Elizabeth’s collection. Originally a wedding present from her father, King George VI, the parure consists of several remarkable blue sapphire pieces, among them a necklace composed of oblong blue sapphires surrounded by diamonds. The Queen not only had the largest sapphire removed and made into a new pendant to shorten the necklace, she added a matching blue sapphire and diamond tiara and bracelet. Naturally, jewels of this caliber were reserved for such important events as the Royal Command Performance and charity concerts. 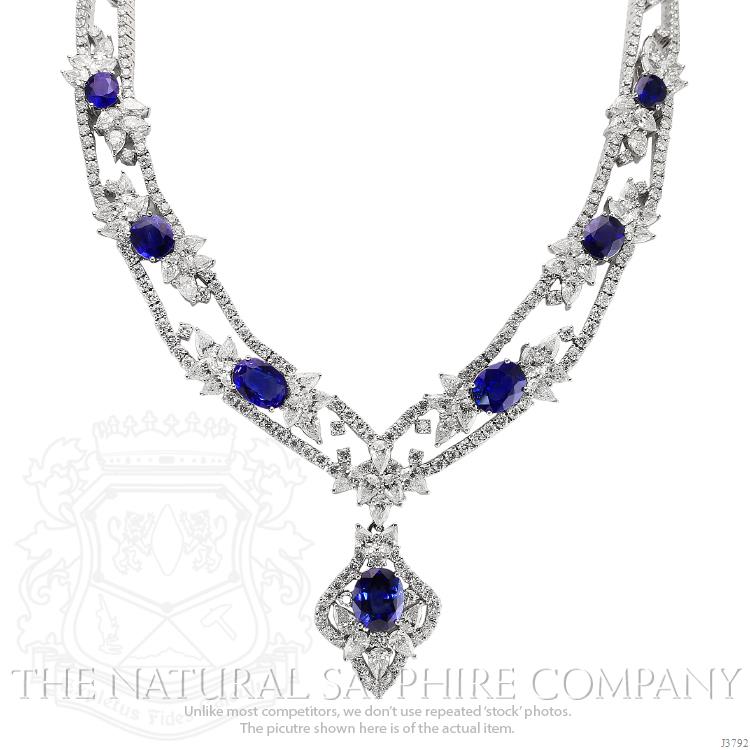 A Necklace Grande Enough For Any Royal Occasion

The princess is also likely to attend events such as these and will need a spectacular necklace on par with our blue sapphire and platinum rivière-style necklace. This extraordinary jewel contains seven oval-shaped natural blue sapphires from Sri Lanka weighing 28.80 carats. Their heat-treated hue thoroughly saturates the stones earning our highest color-intensity rating of “vivid,” while their VVS2 clarity rating is equally as noteworthy. Surrounding the sapphires are 61 pear-shaped diamonds totaling 23.04 carats, appearing as if leaves stemming from a blue sapphire blossom. An additional 348 round brilliant-cut diamonds totaling 17.85 carats intensify the mesmerizing display of sparkle. 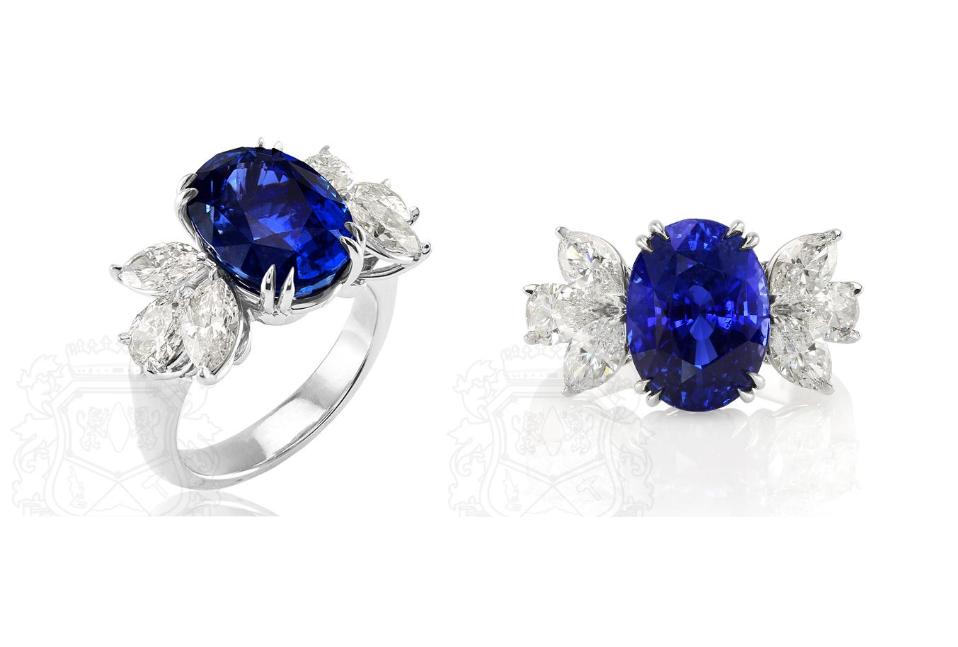 Elegant, Classic But Modern A Perfect Engagement Ring For A Future Princess

If marriage is in her future, we hope the princess fancies blue sapphire engagement rings, much like her mother and grandmother. What could be more perfect than our blue sapphire ring with a natural hue named “royal blue?” At 9.06 carats and with a clarity rated “perfection,” the sapphire is outstanding, fashioned into the oval shape with a mixed brilliant cut. Flanked on each side by a total of six brilliantly cut diamonds totaling 2.43 carats in both the pear and marquise shapes, the sapphire looks like it’s about to take flight with wings of glittering ice. Four double-claw prongs crafted in platinum hold the sapphire securely in place for a lifetime of wear and beyond, guaranteeing its position as an heirloom jewel in the royal collection.

Are Diamonds A Good Investment? The Future of The Diamond Market
Royal Baby Gifts for Kate Middleton’s New Prince or Princess