The Future Of Sapphires

Without a doubt, the most rare, legendary, and prized sapphires in the world; the Kashmir sapphire’s velvety cornflower blue color is as well-known and regarded as Burmese “Pigeon Blood” Rubies. With the height of production lasting less than 10 years, and the Kashmir mines having been considered depleted; the Jammu and Kashmir government is now looking for mining companies with the financial and physical ability to explore the treacherous terrain and continue the production of sapphires in and around the Kashmir region.  J & K Minerals Ltd, a state government enterprise that holds a mine lease covering over 1643 acres at a height of 12.981 feet, has extracted several thousand grams of rough sapphire, however the time that they are able to work at those heights and in good conditions only lasts about two months and production has been up and down, off and on since the 1960’s.

Now the Jammu and Kashmir government has invited parties with expertise in mining to undertake exploration of sapphires through a joint venture with J & K Minerals Ltd. The global tenders for sapphire mining in the region is not a new concept, as over the years the Indian government has often tried to get companies to come to the Kashmir region. However, this time the Jammu and Kashmir Industries Department is planning a satellite survey to find other sapphire deposits in the Paddar Valley, as other sources have been believed to be there since the sapphires initial discovery in the late 1800’s. Until now, two decades of militancy has hindered the exploration of the area, so the fresh tenders now being offered may mean there will be a greater supply of Kashmir sapphires in the future. Chances are, given the conditions of mining in the Paddar Valley, Kashmir sapphires will always be extremely rare. 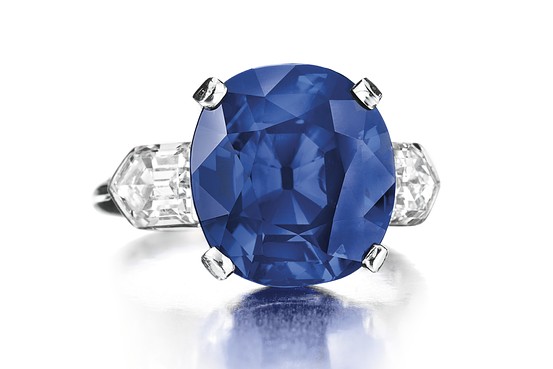 First discovered around 1880 when a landslide 4500 meters high in the Himalayas, in the Padar region, revealed large sapphire crystals. The sapphires were first traded amongst locals, but quickly gained the interest of the Maharaja of Kashmir who confiscated the crystals and posted guards at the new found deposit.  The Kashmir mine was operated from 1882 to 1887, and only for about 2 months out of each year, as the snow and ice throughout the rest of the year that high in the Himalayas made productive mining impossible. By 1887 the Kashmir mine was discovered to be exhausted by British geologist, T.D. La Touche, and over the course of the next century until the present the flow of sapphires from the region has been like the slow drip of a leaky faucet.

Most Kashmir sapphires that come on the market today are found in estate and antique jewelry. Some of the finest are found occasionally at auction, as was recently the case with the Christie’s Auction house. It is rare to find them available as loose stones. Our own 3.03ct untreated Kashmir sapphire here at The Natural Sapphire Company is one of our most loved sapphires, not only for its astounding rarity, but for its vivid untreated cornflower blue hue, stunning clarity, and sparkling facet arrangement. With reports from both the Gübelin Gem Lab and the Gemological Institute of America both stating the sapphire’s untreated Kashmir origins; our Kashmir sapphire is the real McCoy.