Tin Maung (no last name for security reasons) manages our Mogok, Burma office.  He manages our day to day buying of natural untreated rubies and sapphires, as well acts as our correspondent about news and happenings in this enchanted mining town.  Tin Maung has extensive experience working in Burma and helps us navigate the sometimes tricky business environment and transactions.  In this post Tin Maung shares his thoughts and experiences on gem trading in Mogok’s famed Panchan htw-pwè.

Mogok, in Burma, is famous for its Mogok rubies. Sapphire, alexandrite, amethyst, danburite, and peridot are also among the thirty or so types of precious stones produced by the mines in Mogok.

Gemstones are traded in places called hta-pwès. Among the hta-pwès in Mogok, Panchan hta-pwè is unique for having its own compound and its size—the largest in Mogok. 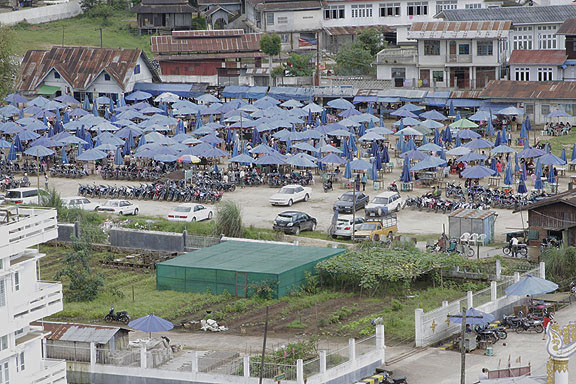 Panchan Hta-pwè, with its blue umbrellas, is the only hta pwè in Mogok that has its own compound. Trading starts at noon and ends at three o’clock in the afternoon.

“Hta” is a new word for people from other parts of Burma. It is a brass plate or a brass tray, on which rubies and red spinels—cut or in the rough—are traded in Mogok, Burma. The yellow color of the brass neutralizes the bluish tint commonly present in ruby, accentuating the red color of the gems. Offering rubies and other red gemstones for sales on a brass plate is also the common practice among the miners and dealers in neighboring Thailand. 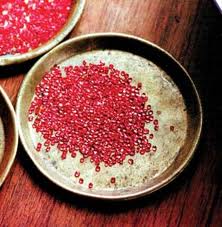 “Pwe” or “pwè” means many things besides what the dictionaries say, especially when combined with other words.  “Ball-loan pwè “ means a football match; “mingalar pwè” a wedding ceremony.

Gem trading sessions in Mogok start at different times to enable dealers to participate at more than one hta-pwè.  Panchan hta-pwè starts at noon and the activities dwindle to a stop at about 3:00pm as dealers leave for other hta-pwès. 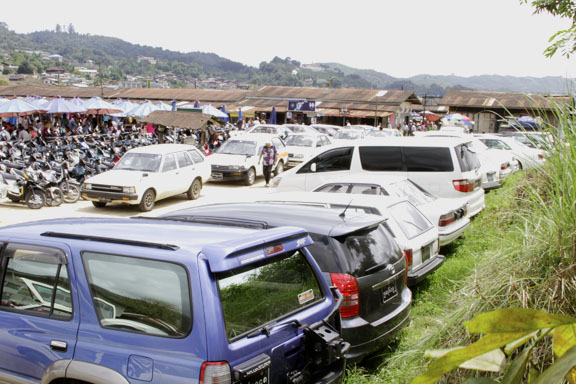 At Panchan hta-pwè, a dealer, or a group of dealers, has an umbrella with a table where gems are brought to them.  There are about 300 umbrellas at Panchan hta-pwè.  A new visitor, interested by the activities going on under the umbrellas, might not notice the dealers at work in the tea shops and other shops selling food.  Those dealers are usually from other places or they also might be people from Mogok who are moonlighting as gem dealers.

Many women dealers also have businesses set up in Panchan hta-pwè. 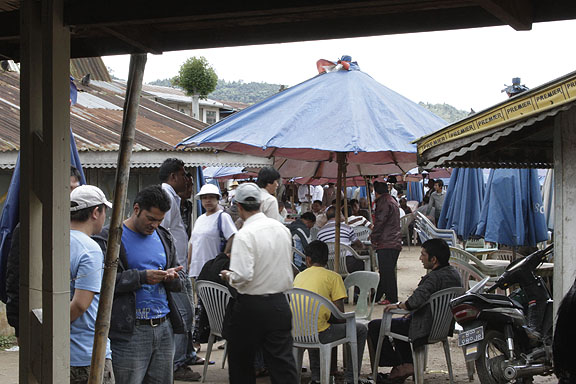 The main entrance has a white and green signboard. The people who enter the place pay K50 each at the gates. 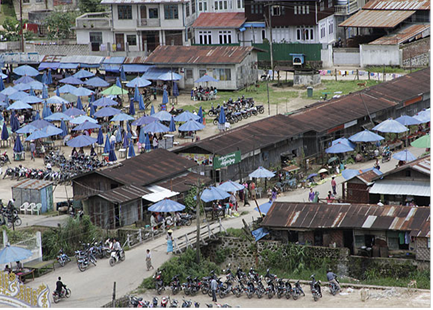 Various kinds of gems in different sizes are brought for sales.  They are cut stones or in the rough straight from the mine.  There are also dealers who specialize in uncut gemstones.

At the main gate of the compound, a signboard declares the owner; the upper one of the two lines written on the signboard translates into “Mogok Township Municipal Board.”  Each year interested individuals or groups bid for the right to operate the Panchan hta-pwè. 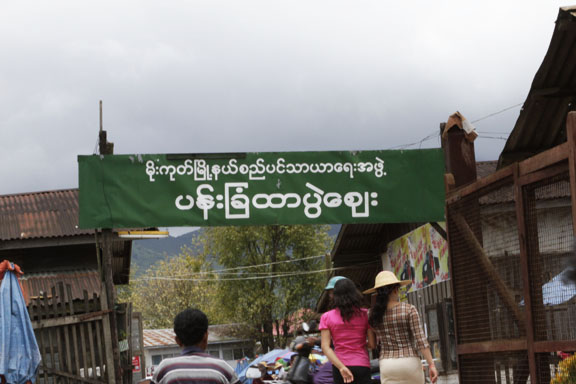 The signboard as seen from the other hta pwè, just across the street. The signboard says, “Mogok Township Municipal Board”, “ Panchan Hta-pwè Bazaar (or Market)” 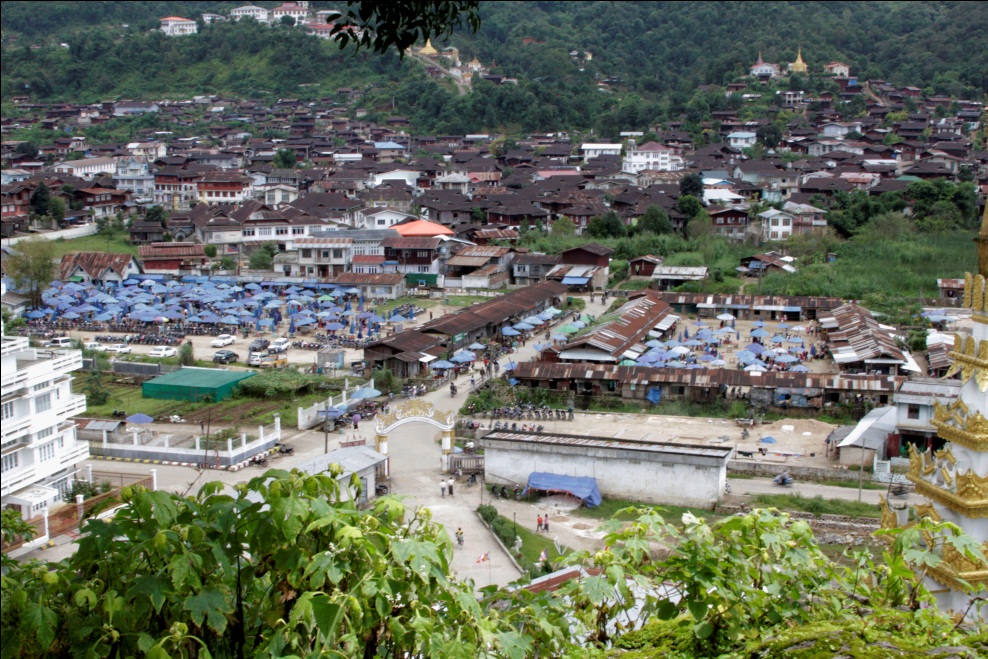 “Panchan Apyin hta-pwè” on the right of the street, also with blue umbrellas. 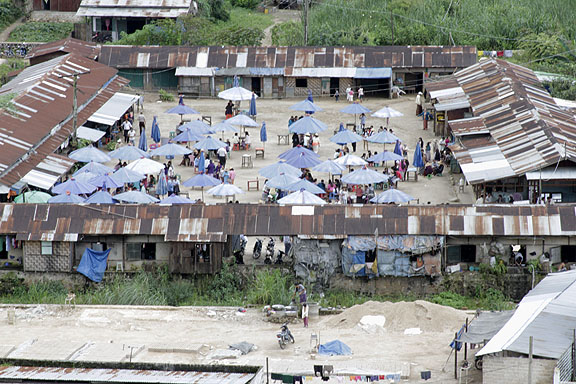 The majority of dealers at Panchan Apyin hta-pwè are women.

There are also other hta-pwès in Mogok; they do not accommodate as much business volume as Panchan hta-pwè.  The dealers work in tea shops and other food shops at the sides of a section of a street. Others choose to sit on stools at the side of the street. 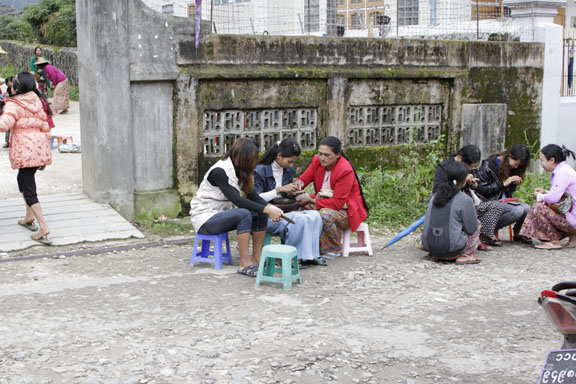 Gem dealers sit on stools at the side of a street in Kyatpyin, during a sesseion of hta-pwè. 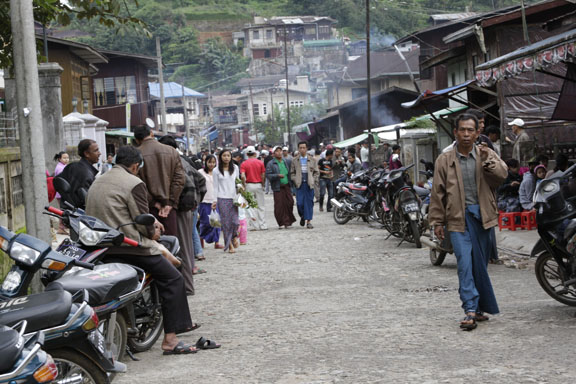 More than a crowded street, a hta-pwè in progress.

Burmese Rubies: Looking to the Future
The Hope Diamond And Our 69ct Blue Sapphire Ring