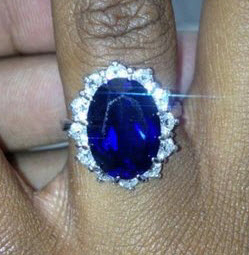 But, it is still up for debate amongst the gossip columns whether or not Bobbi Kristina and her beau (and, um, adopted brother) Nick Gordon are officially engaged. Bobbi Kristina seems to have announced their engagement show on their new reality show, “The Houstons: On Our Own.” But, she and Nick attended a Grammy tribute to her mother this past Thursday and the stunning blue sapphire ring was noticeably absent.

So are they, or aren’t they? The jury is still out. What’s undeniable though, is Gordon’s good taste. Ring designs like Kate Middleton’s and Bobbi Kristina’s are classic and elegant. The fact that Kate’s ring, first given to Princess Diana over 30 years ago, is still popular today is quite a testament to the staying power of a sapphire. Beauty never goes out of style.

If you’re looking for your own bit of royal sparkle, the three rings below are some of my favorites at different sizes and price points.

J3180 is a beautiful and affordable 1.65 carat oval blue sapphire and diamond ring.

J3173 is my personal pick for a Princess Diana style ring with a 2.06 carat center blue sapphire.