Contact Us
Home » Blog » Designing Your Own » A Whiter Shade of Pale ….

A Whiter Shade of Pale ….

White gold, palladium, or platinum?  It can be hard to pick and choose between the three precious white metals (if you like yellow or rose gold, you’re in the clear – there aren’t really any serious alternative alloys out there).  So let’s run down the list and see what their various virtues are, to help you decide ….

Gold is traditionally one of the most valued metals, and its palest variants most definitely have their virtues: for one thing, the color of white gold is uniquely rich (even “white” gold has a pleasant, buttery warmth to it, though if you prefer the whiter shades of pale you can always have your ring rhodium dipped – the one caveat here is that you’ll need to redip it periodically depending on body chemistry if you choose this option).  18K white gold is a bit more pure and a bit more soft than 14K: both are forms of pure yellow gold alloyed with nickel (or our next metal, palladium).  Before you go with white gold, be sure that you’re not allergic: a small percentage of the population has a negative reaction to the nickel that is most commonly used to adulterate the gold and to give it its color. 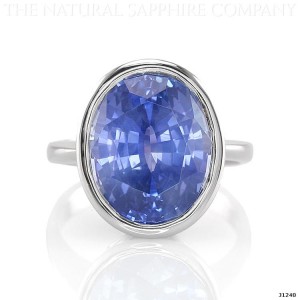 Both palladium and platinum have their virtues: the colors are slightly different, and the feel of the materials is significantly different (palladium definitely deserves its reputation as a space-age metal: it’s very strong, but also very light, whereas platinum is heavier and has a bit more presence).  Palladium is a fairly recent discovery, dating back to 1803, when it was discovered by William Hyde Wollaston, who named it after the recently discovered asteroid Pallas, which was itself named after the Greek goddess, Pallas Athena.  It’s been used widely in jewelry since 1939, when platinum was declared a strategic resource for weapons manufacturing during WWII. 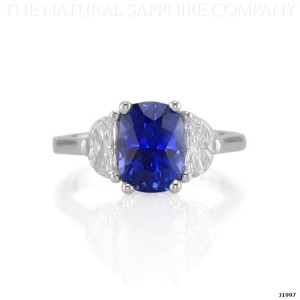 Almost 3 carats of natural Ceylon blue sapphire are flattered by half-moon diamonds, all framed in palladium.

Platinum tends to be the most prestigious of the precious metals these days: it’s the rarest, and, commensurately, the most expensive.  In terms of how it wears: it’s more malleable than gold, which can make it safer and more long-lasting than gold.  For example, if you accidentally scratch gold, the gold you’ve scratched off will disappear, but if you scratch platinum, it just displaces and can be polished back into place; if you catch a prong on something, in gold it might snap off, but in platinum it will just bend back.  Practical as well as beautiful, familiar to jewelers and designers, and possessed of that certain je ne sais quoi in the eyes of consumers, platinum is the ne plus ultra of the jewelry world’s metal choices. 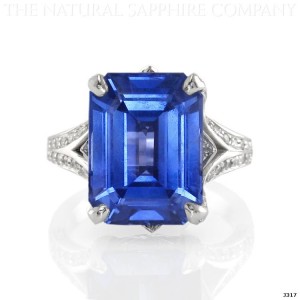 When nothing but the best will do, try Blue Sapphire Ring

So which metal is right for you?  It depends on what you want from your jewelry. Cost?  Color?  Durability?  A complex algorithm of all of the above?  Whatever it is, we’ll be happy to help you decide, whether it’s via one of our finished ring settings or our custom jewelry setting process.

What other way could be used to describe the whiter shade of pale?